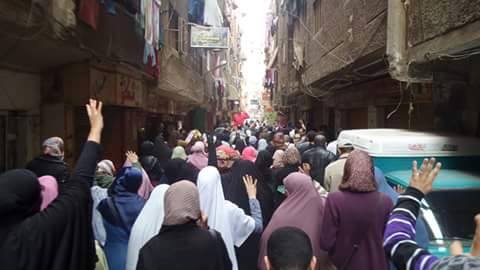 Protesters affiliated with the Muslim Brotherhood have taken to the streets in small groups in several governorates since Sunday morning, defying security forces deployed throughout the country in anticipation of anti-government demonstrations.

The protests come as the now outlawed group has called upon its followers and “the Egyptian people” to begin a new “revolutionary wave”. In a statement published Sunday night, the group said “the coup regime will witness an unprecedented and unexpected revolutionary wave … which will disturb its plans”.

The statement said the “security preparations and the obvious anxiety inside the regime are a clear sign of fear.”

Monday morning saw a number of protests in Sharqeya, Fayoum, and Menufiya. Protests were held Sunday night in Alexandria in the Al–Qaed Ibrahim mosque.  Demonstrators set off fireworks before being dispersed by riot police.

The Anti-Coup Alliance echoed the necessity of staging protests on the anniversary of the 25 January Revolution. In a statement, the alliance indicated a number of locations, mostly mosques, which are intended to be starting points for protests. The locations included mosques in Al-Haram, Mohandessen, Imbaba, 6 October City, Al-Mataryia, Helwan, Faisal, and Maadi.