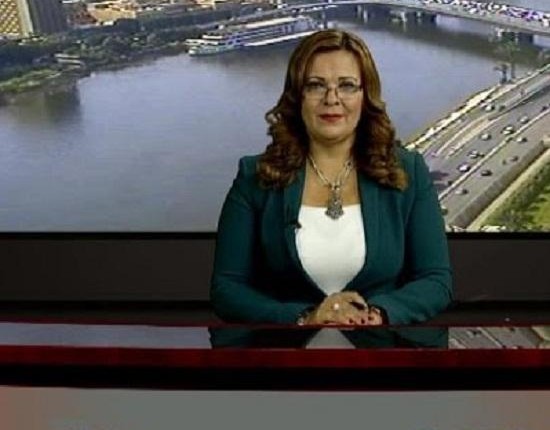 Television host Azza Al-Henawy has found herself banned from presenting her weekly Sunday programme on state television ahead of the fifth anniversary of the 25 January Revolution, in the latest iteration of a series of censorship decisions levelled against the television host.

“Nobody informed me of the reasons why the show was cancelled. Only my colleague called me to tell me not to come in because it has been decided that special broadcast would be dedicated to coverage of the National Police Day,” Al-Henawy told Daily News Egypt Monday.

When asked about the content she planned for Sunday’s episode, Al-Henawy said she was going to address several topics in relation to the revolution’s anniversary, primary among them was the notorious trials of former president Hosni Mubarak.

“I was also going to honour the first anniversary of the death of activist Shaimaa Al-Sabbagh”, she said.

Al-Henawy claims that she has no control over her programme’s writing team, a direct attempt to undermine her editorial authority. “I prepare my own episodes according to ongoing events”, she said.

The incident follows an earlier decision by the channel’s administration to suspend Al-Henawy’s program last November after she criticised the government’s response to the flooding in Alexandria. She was accused of “violating ethical conduct by expressing her own views.”

Al-Henawy reported that there were no other shows at her channel cancelled in the previous two days and that the broadcast schedule did not feature “dedicated coverage of police day.” She further contended that the channel’s decision to present a “common theme” should have not interfered with her programme.

“I can tackle Police Day too, you know. And even if I was to speak of violations committed by some policemen, where is the problem? Isn’t that how we are supposed to establish reform?”  According to Al-Henawy, the situation reflects the “corruption” within Maspiro, the headquarters of the Egyptian Radio and Television Union (ERTU).

It further brings back images of what she called the “shameful” state media coverage of the 25 January Revolution. At that time, television b by denying its existence and broadcasting “empty streets” at the same time as public spaces were filled with protesters.

Al-Henawy contends that the media chose to ignore the 2015 commemoration of the revolution, censoring the broadcast of revolutionary songs, footage of Tahrir Square, and the 18-day struggle.

“Media hypocrisy will not serve this country right. We need media content that actually addresses people’s issues and respects their minds”, Al-Henawy said.

The commemoration of National Police Day made the titles of Sunday’s local newspapers, while the anniversary of the 25 January Revolution was the focus of Monday’s papers. In both cases, newspapers’ front page headlines highlighted President Abdel Fattah Al-Sisi’s speeches addressing both occasions.

Most newspapers that addressed the revolution’s anniversary highlighted the paradox that has prevailed in the Egyptian social and political spheres over the intermediate years: was it a revolution or a conspiracy? The coverage varied between recalling the demands and hopes of the people, with a focus on the youth demographic, while restoring, on the other hand, the idea of the Muslim Brotherhood’s conspiracy to destroy Egypt’s national security.

This sentiment was echoed in Al-Sisi’s Sunday speech in which he stated that the 2013 30 June uprising was a corrective measure of the 25 January Revolution, which was hijacked by the Muslim Brotherhood and their conspiracy to sabotage Egypt’s national security.

State-owned newspapers followed that approach by praising the current regime and focusing on the notion of a Brotherhood conspiracy. Al-Ahram newspaper published an in-depth report highlighting the “achieved demands of the revolution”.

As for Al-Akhbar, it published on its front page a news story about revelations made by Judge Ezzat Khamis, who heads the committee charged with assessing and managing Muslim Brotherhood funds. Khamis claimed that documents found at offices affiliated to the organisation and seized by the Egyptian state show a plot to attack state institutions such as the judiciary, the army, and others.

Meanwhile privately-owned Al-Masry Al-Youm gave more space for political activists. It published an interview conducted with activist Alaa Abdel Fattah, who is serving a five-year sentence in prison. Abdel Fattah criticised the current regime, condemning what he called “the massacre of Rabaa Al-Adaweya”, which he said should have been condemned by all, including non-Brotherhood supporters.

The newspaper also published a full page interview with activist Abdul Rahman Mansour, who administered the famous Facebook page called “We are all Kahled Said”. It also interviewed the families of other revolutionary activists such as Ahmed Douma who was issued a life and Ahmed Maher who is serving a three-year prison term.

Writer Ahdaf Soueif and political scientist Amr Hamzawy wrote two pieces for Al-Shorouk newspaper. Both pieces criticised the regime’s “state of apprehension” in the face of the fifth anniversary of the revolution evinced by its censorship of art and culture institutions, oppression of political speech, and restricting citizen participation in public life.

I will not abandon my duty of telling the truth: El-Henawy