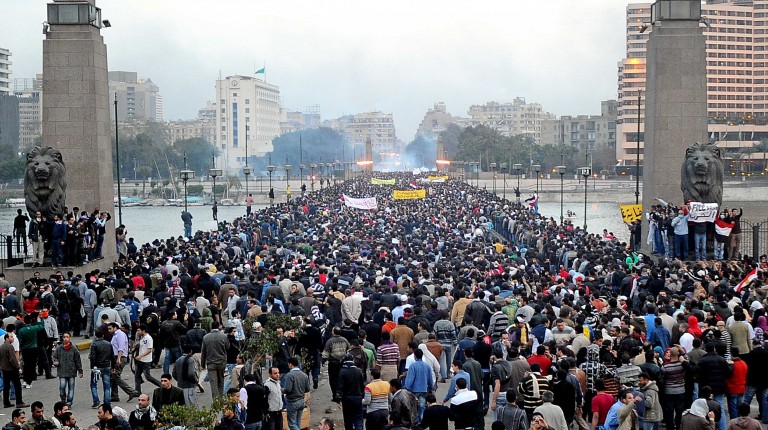 On 25 January 2011, five years ago, Ahmed El-Sheikh, 26, was sitting in front of his computer looking for any sign of people gathering on the street demanding change. However, on the anniversary of the revolution, he has almost lost hope of feeling the spark he once felt.

Back then, El-Sheikh recalled that he was one of the people in charge of directing people to the places of demonstrations and gathering points through posts published on social media.

When El-Sheikh first heard about the death of Khaled Said, whose death at the hands of police officers was one of the sparks of the revolution, he never imagined anything would change on the Egyptian political scene.

“We all knew how strong the regime was and none of us ever suspected it might fall,” he said. However, seeing the Tunisian revolution revived the hopeful spirit inside him, leading him to communicate with many others to set the wheels of the Egyptian revolution turning.

“I was living in a village in Kafr El-Sheikh, in northern Egypt, so I did not have the chance to go to Tahrir Square, especially when we did not know if anyone would respond to the calls and there was no sign of any marches at my village,” he said.

For the next three days, El-Sheikh was responsible for revealing the untold stories that occurred in the streets during marches and demonstrations.  This included spotting the places in which police forces took control over and assaulted protestors, finding alternative routes for the marches, and points in which more presence was needed to support others.

“I was responsible for writing about those who protest in the streets to those who want to know what’s happening, where, and when,” he said. “I had almost no money to travel to Cairo, but I could not let go of taking part in my dream to see Egypt change, even if this was only through sharing the news of protests”.

Throughout the day, Ahmed would communicate with his friends all over Cairo and Alexandria, to update people on the conditions and ask for their support for the escalation.  At night, he would provide a wrap-up of all the events throughout the day and post it on Facebook and Twitter.

“In the village I was living in, I would constantly hear people talking about the young, immature men who would never be able to create any change, and that it was just a matter of days until they got caught and things would go back to normal. Meanwhile, on social media, I could see the intensity of the youths who were willing to do everything to keep the revolutionary spirit on fire and in between I knew it was about time that the distance between both worlds had to be closed,” El-Sheikh said.

That was the moment he decided to go down to the marches taking place on 28 January 2011, or what is now known as the “Day of Rage” without knowing he would become one of the badly injured people he was writing about.

“I took some money from my mother and told her I was going to meet some friends, then I headed to Al-Mansheya in Alexandria, where I knew a march would start after Friday prayers,” he remembered.

Once the march reached Al-Mansheya police station, “the massacre” began, as he described it. Shotguns were firing everywhere, he said, and all people could see was others falling around them, and “the smell of blood” everywhere.

“I was determined to describe the violations as I had been doing the whole time, so I took my mobile and started shooting what was happening while hiding behind an old phone booth,” he said.

While he was successfully shooting, one of the police officers noticed the reflection the mobile made on the phone booth, so the police shot at it. The bullet missed him, striking near his head. However, the fragments from the phone booth led to damage in one of his eyes.

Afterwards, he was transferred to a nearby hospital by a young woman who was walking by and witnessed his injury. El-Sheikh remained in surgery for nine hours. Soon after he woke up, his main concern was to make sure his friends who participated in other marches across the country were fine.

He first called his best friend, Ahmed Bassyouni, who was also a photographer who aimed to document the violations in Tahrir Square. However, it was not Bassyouni who answered him, but a woman’s tearful voice: “Bassyouni is a martyr, he was killed.”

In the following days, El-Sheikh remained in hospital; he could only hear the voices from the television in his room, without many updates about the revolution.

“I only had one thing in mind; Who would get retribution for those who died?” he said. “It is a question I have not found an answer to until this day, five years later.”

Many marches later, and days in which El-Sheikh protested, demanding the rights of his friend and many others, and fighting to preserve the revolution’s memory, he has lost hope for the change he once dreamed of.

“I can clearly say that all of my closest friends who participated at the revolution with me are either dead, imprisoned, or decided to travel abroad and start a life in which they can forget the pain they witnessed in the past five years. The pain of seeing a dream fade away,” he said.

What do you think of the 25 January Revolution now?

In Pictures: 25 January 2016, Yet another militarised response to dissenting protest