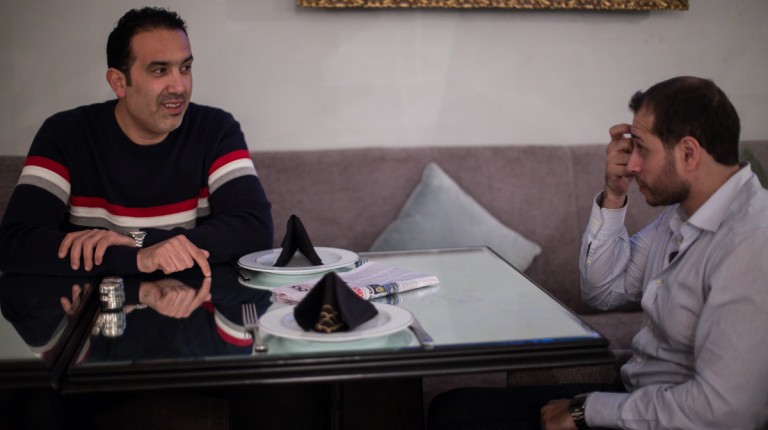 Mohamed Yousef has been as a basketball presenter and commentator in sports in Egypt for 38 years. The former Al-Ahly and Egyptian international basketball player has had a long career, passing through a number of international clubs including in Greece and the Nicosia club in Cyprus.

He is currently the presenter for BeIN Sport, the NBA basketball show on Qatari media network.

How do you evaluate the level of the Egyptian national basketball team right now? Is there a change it will go back to leading basketball in Africa as it did before?
No this would be very difficult right now because first of all, there is no tough league competition in Egypt as there was before. Moreover there are no fans right now, which affect the players’ motivation level. Besides there are no international professionals allowed now after the Egyptian Basketball Federation’s decision to ban them without any explanation.

Previously they use to allow US and African professionals in the teams and when Egyptian players competed and played with those high-level players, they gained much more experience with regards to what kind of strategy one could use. It also removed the fear of competing with the best African teams like Angola, Nigeria, and Senegal.

On the other hand, other countries like Tunisia, which is currently witnessing a period of high evolution in basketball and are the current African champions, allow international professionals and have the highest league levels in Africa.

Some Egyptian players play in high-level college leagues in the US, like Anas Osama, Hazem Marei, and Ehab Ibrahim. They were able to make a positive performance internationally but others who play in low-level college league competitions cannot enhance our Egyptian national squad with the level it requires.

In addition to this, Egypt always has the upper hand in African youth championships but when it turns to the professional level, we fall because players do not follow a plan or strategy from the federation to become good competitors for Africa and qualify for the Olympics. Moreover there are a lot of battles within the federation, which has a severely negative effect on our national team.

Meanwhile the Tunisian national team has been preparing to become African champions since 2006, with a good plan, keeping ten players from the squad until 2016. They currently have a player in the NBA, Saleh El-Magrey  who plays for the Dallas Mavericks, coming from Real Madrid the European champions.

Now Tunisians are African champions, and are about to qualify for the Olympics for the second time in a row. Therefore, to make a comeback, Egypt should keep their youth team squads playing as part of a strategy, because now you will find that the most the talented promising players retire very fast and work other jobs. If we take a look at any player, Samir Gouda who played in Europe, and Ismail Ahmed who plays in Lebanon are the only Egyptian professionals in 24 years.

What is your opinion regarding BeIN Sport network’s monopoly over Arab sports broadcasting?
BeIN Sport, from its early beginning in 2004 when it was called Al Jazeera Sports, had a plan to become one of the most successful sports channels worldwide, like Sky Sports, with many different languages in many countries.

Was the name changed from Al Jazeera to BeIN for political reasons?
Yes, this was one of the reasons, but not the main one. They have built a worldwide international broadcasting network in France, the US, Italy, Spain, and the UK, so it is easier for branding to use the name in BeIN sport, rather than an Arabic name like Al Jazeera for marketing and sales. However, it has helped us a lot, following the political tension that occurred between Qatar and some countries like Egypt, for example. We faced some problems when we were operating under the former name  Al Jazeera, in Egypt and many rejected us, but now things are fine. We move around and shoot anywhere with the BeIN sports logo, because we are only dealing with sports, not politics.

Did the political conflict between Egypt and Qatar after the 30 June uprising affect Egyptians working in BeIN Sport?
To be honest, not at all, because in BeIN Sport, we are even in a different building than Al Jazeera news, with a different administration, and a different HR department. We never felt that the current political situation affected our work or relations, even with our Qatari mangers. We always left politics out of sports, and this is a fundamental rule in BeIN Sport.

Meanwhile, they value Egyptian media professionals a lot, and they know that Egyptians were pioneers in Middle East media. They always try to sign top Egyptians stars, like Mido, Hazem Emam, Hany Ramzy, and Haitham Farouk for analysis, and Ali Mohamed Ali and Ahmed El-Tayeb for commentating.

If somebody speaks about politics on our shows, they warn that no politics should be involved and say we do not have to deal with politics. Moreover, Nasser Al-Khalaifi, the current BeIN Media Group chairman, has placed Egypt as a top marketing priority, because we are the biggest market in the Middle East due to the high population. They have opened a new big building for sales in Maadi.

Do you view BeIN Sport as profitable?
Currently, BeIN Sport’s strategy is to become more profitable, because Qatar pushed to purchase every copyright for all famous international competitions in all sports. From now onwards, BeIN sports should make profit. For example, BeIN Sport reached the second spot in the world after Sky Sports, so now they are seeking more profits, especially in highly populated countries, to attract much higher viewership.

What is your opinion regarding foreign players who are given the Qatari nationality in exchange for playing for their teams?
I am totally against this, as this bought honour will not benefit Qatar on the long run. They must build a long term strategy to compete in both Asian and international competitions. Although they qualified to the 2006 World Cup for basketball in Japan with foreigners on the Qatari squad, this will not help, because foreigners only seek money.

Why do you think the Golden State Warriors won the NBA last season?
What happened in the NBA last season is an excellent example, and should be studied by other teams who wants to win. First of all, the Golden State squad’s average age is quite young, and their players are active and greedy for success. The oldest is 26 years old. In addition, this is their head coach Steve Kerr’s first time to be a head coach, and he has a surprising story. He used to play in Egypt, believe it or not, at Gezira Sporting  Club in Cairo. He was born in Beirut, Lebanon. His father was a professor at the American University in Beirut, and was killed during the civil war in the early 1980s when Kerr was 13 years old.

Kerr then travelled with his mother to Egypt and studied in Egyptian schools, then he joined the American University in Cairo and played on their team and in Gezira club. The board of directors of the club gambled on his success. He we like Guardiola in football, when Barcelona promoted him to head coach and he won every game.

Golden State won the title after 40 years. Kerr also used to be a great basketball player in the golden age of the Chicago Bulls, with Michael Jordon, and won the NBA title three times. He transferred this to his players, and of course having great players helps, like Stephen Curry – best NBA player last season – and André Igoudala and Klay Thompson.