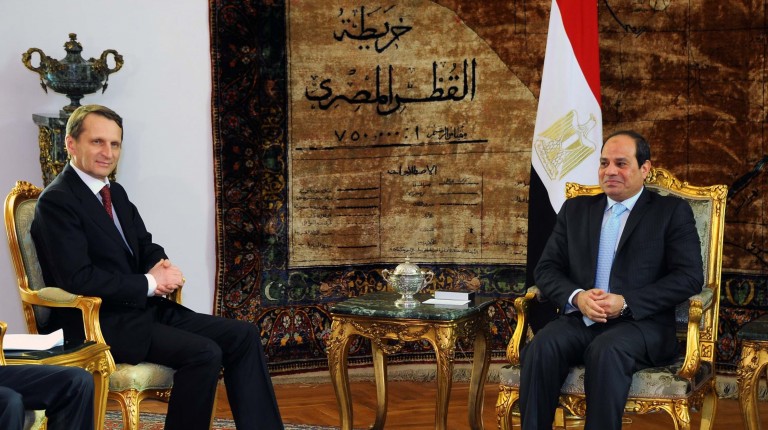 Al-Sisi and Naryshkin confirmed they are looking forward to the resumption of flights between the two countries, given Egypt’s significance as a tourist destination for Russian tourists.

Flights were suspended after a Russian plane carrying 224 passengers was on its way back to the city of St. Petersburg from Sharm el-Sheikh airport when it crashed in Sinai on 31 October.

The meeting also addressed a number of regional and international issues of mutual concern as Naryshkin asserted that Russia is keen on consulting and coordinating with Egypt regarding regional and intentional issues, primarily combating terrorism and extremism in the Middle East and efforts to resolve existing conflicts in the region, according to a presidency statement.

“We really discussed in detail issues of resuming the flow of Russian tourists to Egyptian resorts, and I am convinced that we will be able to solve these tasks soon,” Naryshkin told journalists in Cairo Tuesday after the meeting. Naryshkin added that the Aviation authorities in countries are developing measures to ensure tourist safety.

“Currently representatives and experts of our countries’ aviation authorities, representatives of the agencies responsible for security issues are actively working together to develop a package of measures that would ensure Russian tourists’ safety in Egypt,” he said.

Russian Deputy Transport Minister Valery Okulov reported Monday that the Russian-commissioned report on the security of Egyptian airports will be ready for publication in one week.

The international community became concerned regarding the security of Egyptian airports after the downing of Russian commercial jet A321 in the Sinai Peninsula last October, killing all 224 passengers and crew members on board.

In November, Moscow announced the plane was downed in a terrorist attack after its investigation committee announced it had found explosive material in the remains. Moscow issued an immediate suspension of all commercial flights to and from Egypt, pending a report on the state of security procedures at Egyptian airports.

Chairman of the international committee of Russia’s State Duma lower parliament house Alexey Pushkov said Tuesday that Egypt is trying to balance in its foreign policy between its relations with the US and Russia.

“There was a period when Egypt embarked on a course towards distancing from Russia in favour of closer contacts with the United States. It looks like this period is over,” Pushkov said.