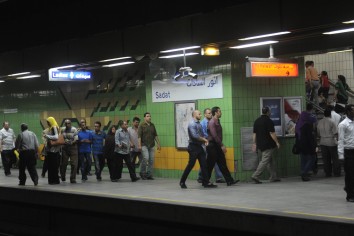 Cairo’s Downtown metro station, Sadat, is to remain closed until Thursday upon request from security agencies.

The station was closed early on Monday, ahead of the fifth anniversary of the 25 January Revolution, for security reasons, according to statements from Metro administration spokesman Ahmed Abdel Hadi.

Situated in Tahrir Square, the station is seen as security threat, with the square being a popular place for gatherings, and having hosted major protests that resulted in the ouster of former president Hosni Mubarak, as well as several other protests post-Mubarak.

The station remained closed for almost two years after the violence in Rabaa Al-Adaweya during the dispersal of a pro-Morsi sit-in. The closure caused millions of Egyptians to suffer from overcrowding during morning rush hours, as Al-Shohada metro station became the only transfer point between the most popular first and second metro lines.

25 January 2016: Yet another militarised response to dissenting protest