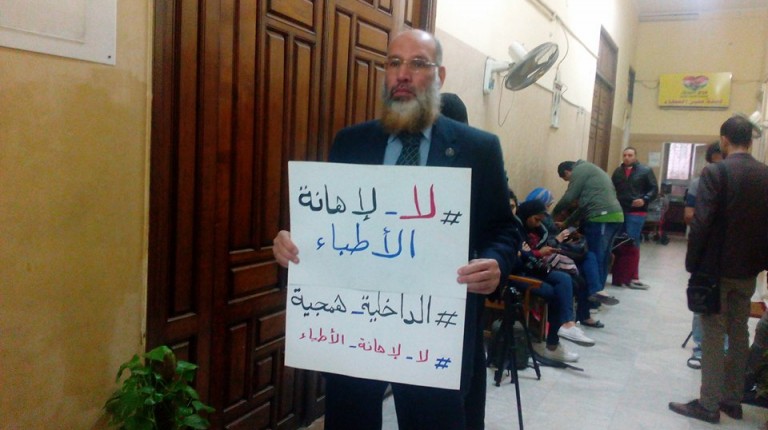 The Doctors Syndicate is calling for the prosecution of police conscripts accused of brutality against two doctors in the Matariya Teaching Hospital, among other demands that will be presented to the Prosecutor General by a delegation heading to his office Sunday noon.

Members of the syndicate’s council held a prolonged emergency meeting Saturday followed by a press conference, in which they announced a permanent session and that the general assembly will convene for an urgent session on 12 February.

A sense of anger prevailed during the press conference, while a number of doctors were holding banners denouncing police brutality and demanding the enforcement of justice and respect for human rights. One of the doctors present, Alaa El-Din Mohamed, spoke to Daily News Egypt before the press conference.

“What we are facing here are direct threats from the prosecutor towards our colleagues, forged medical reports, and [collusion] by the hospital director who deleted video evidence of the assault. [The police] commit crimes against citizens every day,” Mohamed said.

“If [this is the result] of corruption, then corrupt pubic officials must be replaced. Corruption is also widespread within the Ministry of Health by approving laws [that facilitate] more corruption. I have presented a complaint against President Abdel Fattah Al-Sisi, former prime minister Ibrahim Mehleb, and his cabinet, [who are] responsible for failing to apply social justice and respect human rights.”

The assembly and press conference follows a reported assault on doctors Moamen Abdel Azim and Ahmed Mahmoud El-Sayed. The two doctors told the press that beginning on Thursday evening through Friday, they had been subjected to insults, severe beatings, and threats as a group of conscripts attacked them at the hospital, repeatedly.

Head of the syndicate Mona Mina denounced the incident at the conference and “that those who were in charge of the doctors’ safety were their assaulters”. She further announced that they closed the reception service at the Matariya Hospital, where the incident took place, and said that the only cases that are already inside the hospital will be treated. She further noted that all doctors are subject to the syndicate’s decision, irrespective of the hospital administration’s objections.

“The issue began simply. [A conscript] had a scratch on his face and [El-Sayed and I] said ‘it’s no big deal’ as we prepared to look after him, but he [misunderstood] and actually started a fight with us. He believed he was ‘severely’ injured and wanted a report stating that,” Moamen had told the press.

Moamed said that what followed was that the conscript and his colleagues persistently beat them, threatened them when they asked the receptionist to call for help, and detained them inside a surgery room.

“The conscripts also assaulted the doctor on night shift and after a long attack took us to the Matariya police station, where we were interrogated,” he said.

Moamen further decried what he referred to as “a forced dropping of charges” against the conscripts after he was shocked to be informed by the prosecutor that the conscripts filed reports accusing him and El-Sayed of assaulting them. The prosecutor told them that if “they want to file charges”, the doctors will have to be detained.

“Imagining the idea of being detained at the Matariya police station specifically, with all those angry policemen, who had forged medical reports and faked injuries to get back at us, caused me to ask the officer if I could be detained elsewhere. He refused. El-Sayed insisted on getting his rights but I was afraid I would never emerge alive from that police station, so I dropped the charges.”

During the conference, the syndicate announced the solidarity of the doctors’ syndicate in Alexandria, in an attempt to extend the issue to the national level, calling for an end to the “constant threats” against doctors while on the job, including “daily assaults by citizens”.

The syndicate said it would invite the Ministry of Health to its urgent general assembly.