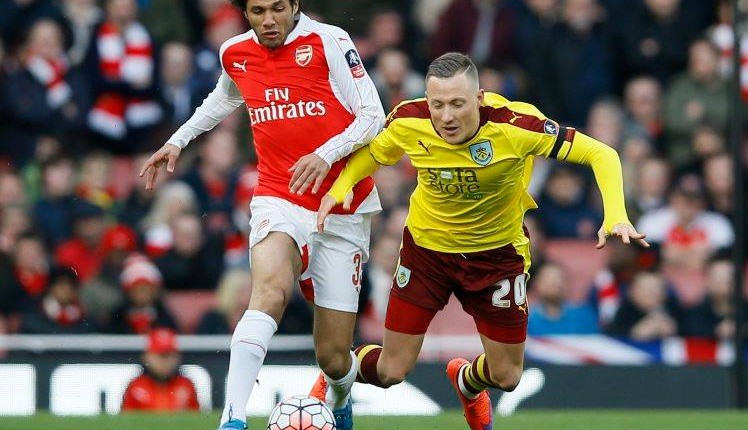 The midfielder for Egypt’s national team, Mohamed Elneny, 23, made his debut in English football when London giants Arsenal hosted Burnley in the fourth  round for English FA cup.

Arsenal left the Emirates Stadium with a 2-1 victory thanks to goals by defender, Calum Chambers after 19 minutes and the second by forward, Alexis Sanchez at 53 min after Burnly scored at the 30 minute mark.

Arsenal French manager Arsène Wenger was in good humour after the game and hailed Egyptian midfielder Mohamed Elneny following his solid performance which led the Gunners to triumph.

The Egyptian played for 90 minutes, and Wenger was impressed by his debut at the Emirates Stadium, but admits it may take him some time to adjust to English football culture and said: “I felt he started cautiously, played it a bit too secure. He did become more adventurous; he had some good shots on goal.”

“His ability, his work rate was exceptional and for the rest, he needs to adjust to the power of the game in the Premier League.

“Today was a great introduction and he has certainly learned a great deal today. It will take him some time to adjust to the power side of our game here, but his intelligence,  agility and technical level are good.”

Elneny will be Arsenal’s only signing