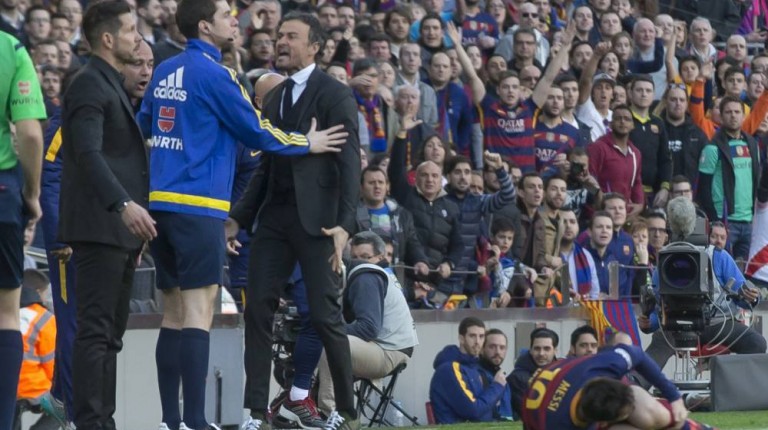 FC Barcelona is back in the running for the Spanish league title, La Liga, for the second year in a row as they beat Atletico Madrid 2-1 in Round 22 at Barça’s home grounds, in front of almost 100,000 spectators in the Palau Blaugrana Arena.

Atletico Madrid had a strong start when Koke scored in the first 10 minutes. It was a tough performance for Barcelona until Lionel Messi scored them a goal in the 30th minute. Luis Suarez scored the second goal for Barça in the 38th minute when he managed to block a long pass from Dani Alves and slip the ball through the legs of Altetico’s goal keeper.

Atletico Madrid’s play style in this match was aggressive and undisciplined, resulting in a red card each for left back Filipe Luis and center back Diego Godin, leaving the team only nine strong for the rest of the game.

FC Barcelona has topped the league table with 51 points, three points ahead of Atletico Madrid.

Barcelona boss Luis Enrique spoke to Spanish media after the game, commenting, in particular, on Filipe Luis’ unnecessary tackles on Messi: “You saw my reaction, so you know exactly what I was thinking. I was shocked, but this is football.”

“We approached the game as we always do, looking to go on the offensive. However, things can pan out differently when you’re actually out on the field. We struggled to get going and were a goal behind due to error after errors. Fortunately, we got a second wind and changed the course of the first half.”

“They make up a very strong team, so our aim for the second half was for a clean finish. It was a tough match right to the last second. This game showed Barça’s resilience and dedication. We’ve become spoiled around here; people act like if you don’t win 4-0 then you’ve had a terrible game. But our fans know that this is not the case and that 2-1 is a fantastic result.”