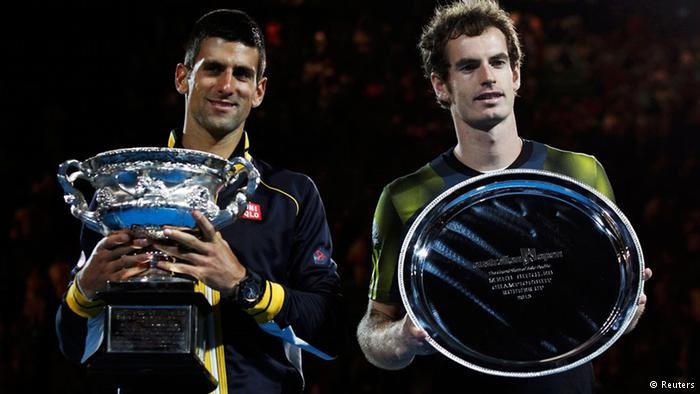 The men’s final of the Australian Open is a replay of the 2015 final, and features the two top-ranked players in the game. However, the chances of this year’s final producing a different result don’t look promising.

The world No. 2, Britain’s Andy Murray, will go into Sunday’s match in Melbourne hoping to change his luck at the Australian Open, having lost the four previous finals that he has reached. Three of those defeats came to his opponent on Sunday, the world No. 1, Novak Djokovic of Serbia.
The two are nearly equal in rank and age (both are 28, Murray is a week older), but on the court, Djokovic has had the edge on Murray in almost every department. Of the 30 matches they have played against each other on the tour, Djokovic has won 21. The two are more neck-and-neck in finals play, Djokivic winning seven of his 13 meetings with Murray. The Serbian has a formidable advantage on hard courts too, having taken 17 of their 24 encounters.
The timing is also not on Murray’s side, with Djokovic getting an extra day of rest after his four-set defeat of Roger Federer in Thursday’s semifinal. The Serbian also had a slightly easier time of it in his semifinal match than his Scottish opponent, he needed only four sets to dispatch of the 34-year-old Federer, while Milos Raonic took Murray to five sets before being hobbled by a leg injury.

With history stacked against him, Murray knows that he will have to be at his best if he is to take his chance to win his first Australian Open this Sunday.
“A lot of things are important when you play the best in the world. You cannot do anything poorly. There can be no lapses in concentration,” Murray said after beating Raonic. “He played well in his last couple of matches and we’ve played a bunch of times – hopefully this time there will be a different result.”

The men’s final has all the makings of a great contest regardless of the result, but the clash will have a lot to live up to if it is to match the excitement of the women’s final.