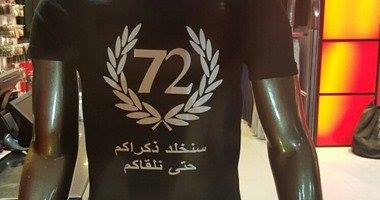 During daily training in preparation for an upcoming game, Al-Ahly team players wore t-shirts with the words “We Will Never Forget You” printed on them as a tribute to their fans, who died in Port Said on 1 February 2012.

In the middle of the game between Al-Masry and Al-Ahly at Port Said Stadium a riot broke out between fans of the opposing teams; the fans continued to clash after the game, which resulted in the deaths of 72 Al-Ahly fans.

Al-Ahly team organised a gathering as a memorial for the victim’s families their fans during their training on Monday in Zamalek, Cairo.

The team players are training for their upcoming game with Ennpi on 3 February for the Egyptian Premier League.

Only club committee has right to let us go: Mahmoud Taher