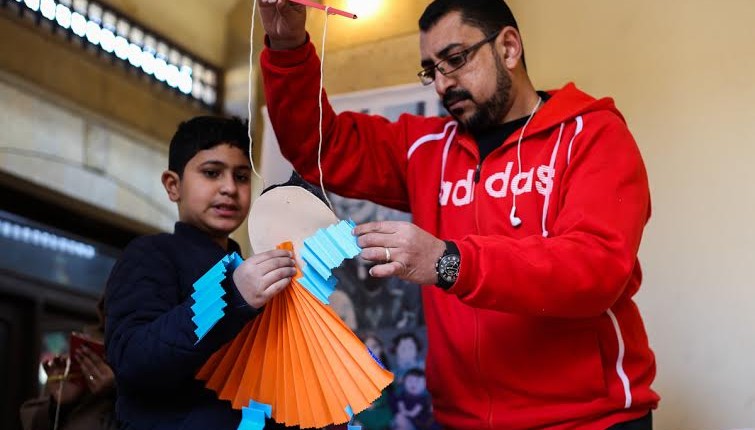 The Great Pyramids of Giza, Al-Muez Street, and the Egyptian Museum are some of the main tourist attractions to explore the beauty of Egypt. However tourists are rarely introduced to another side of Egypt, where the artistry of the handicraft industry is created.

Near the Religious Complex at the heart of Old Cairo, “Souk El-Fustat” (El-Fustat Market) is located. Just a short walk inside the market is enough to remind tourists of the forgotten handicrafts,  once a thriving industry. Pottery, drawing, crochet, and carpentry are some of the handmade crafts by old people who spent their lives with this as their only source of income.

The ancient market takes tourists back in time to a forgotten era, with its charming Islamic decorations, the scent of the fabrics and the smell of fresh paint. For 15 years, the market has been renting over 30 shops that sell different handmade products as well as workshops about the making these products.

Souk Al-Fustat was established by “Amr Ibn Al-‘As”, the founder of the Egyptian capital of Fustat which was built for his soldiers. Long after he passed away, the Ministry of Tourism adopted the project of turning the place into a market that sells handmade products to showcase the Fustat’s culture and history.

The market aims to revive the practice of handicrafts as it was a huge part of the ancient civilisation here. It also offers tourists products that differ from Khan El-Khalili’s. At the workshops, products are created in the open, for all to see; visitors can buy the finished product after having seen it being made from scratch.

However the place did not attract as many tourists as other ancient places. “Even though we are part of the Tourism Development Authority’s projects, [Al-Fustat Market] was not advertised like other touristic places,” one of the tenants, , said. “Things even got worse after the 25 of January Revolution in 2011; people stopped buying anything from us.”

After the revolution, the market has been suffering a lack of financial income for the past five years. With fewer Egyptian and foreign tourists, lack of advertisements, and no other source of income, the tenants decided to revive tourism in their own unique way.

“We decided to do handicraft festivals every month,” she said. “We would hold a festival about an ancient handicraft.”

At festivals, specialised professors would hold lectures about the history of the craft, where it started, when, and how it developed over the years. Moreover workshops will be scheduled to teach attendees about creating products from scratch until the final output is ready.

“We started with the copper festival. Throughout the event, we taught attendees about the history of brassware in Egypt in several sessions while five specialists held workshops to teach them how to create copper pots with their own hands,” she said.

A marionette puppet festival was recently held, in which attendees were introduced to the history of puppet shows in Egypt and how they are moved and used to deliver satirical stories. Sessions about the industry of puppet making were also a part of the festival, in which attendees came out from learning how to create a puppet from scratch and set a play with it.

“We used colours and materials that help teach people how to create a puppet in the simplest ways,” one of the trainers, Noha Hamam, said. “Such handicraft relaxes the mind.”

“I wanted to be a part of this festival by performing a puppet show for children,” Ahmed Na’em, a puppet maker, said. “Such festivals should be held more in a society like Egypt’s where children need motivation to develop their creativity.”

Hundreds of people attended the festival even though it was only advertised over social media. “We never imagined people would engage with our festivals and the workshops as they did,” the tenant  said. “Children were so excited to know about the history of handicrafts and learn how to create products with their own hands rather than just watching documentaries about these products.”

From the tenant’s point of view, not so many people know that there are places to provide workshops about handicrafts and once they knew so, nothing stopped them from learning.