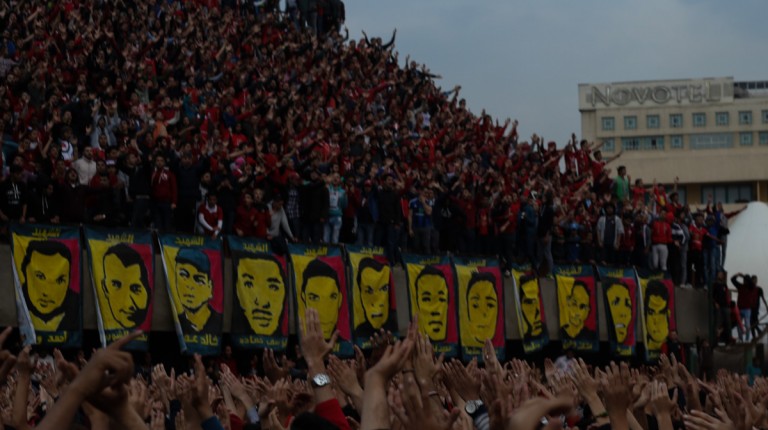 The president’s statements came during a televised phone interview with the privately owned TV programme Al-Qahera Al-Youm, in which he described the Ultras football fans as “a problem still unsolved.”

He defended the current Egyptian state claiming “that it was collapsing in 2011,” asking the audience to observe the difference between the period of 2011 to 30 June and from 30 June onwards. He also said that he is not upset with the youth, but is upset for them.

On 1 February 2012, 72 supporters of Al-Ahly SC were killed after riots broke out following the final whistle of a match Al-Ahly and Al-Masry SC. Al Masry fans stormed the pitch, attacking players and fans. The coroner reports revealed that those who died had been stabbed, beaten, and trampled by the stampede.

On Monday, thousands of Al-Ahly fans commemorated the fourth anniversary of the death of their fellow fans, by denouncing Field Marshal Mohamed Tantawy, who headed the Supreme Council of the Armed Forces (SCAF) at the time. Fans have accused the Armed Froces of organising the riot as a pretext to attack Ultras in response to their anti-military chants.

Following the riots, the board of Al-Ahly, headed by Mahmoud Taher, decided to ban all fans from entering the club and the training stadium.

In a statement issued Monday, Al-Ahly’s board abnegated responsibility for the behaviour of its fans and called for those that do not respect the legal parameters of the Egyptian state to be arrested.

“Everyone respects the national institution and supports it, especially the Armed Forces, the shield of the homeland, as well as the Ministry of the Interior, which represents security. No one can deny their role in reviving the sports scene,” the statement said.

Since their creation in 2007, the two dominant ultras groups, Ultras Ahlawy and Ultras White Knights (UWK), have engaged in numerous clashes with police forces. The ultras have become known for their anti-police and anti-government slogans, and played a key role in the 25 January Revolution.

Members of the groups have been targeted by police authorities and state security, as members have been subject to arrest, detention and interrogation on alleged terrorism charges.

Fire at a police building in Port Said amid increasing unrest