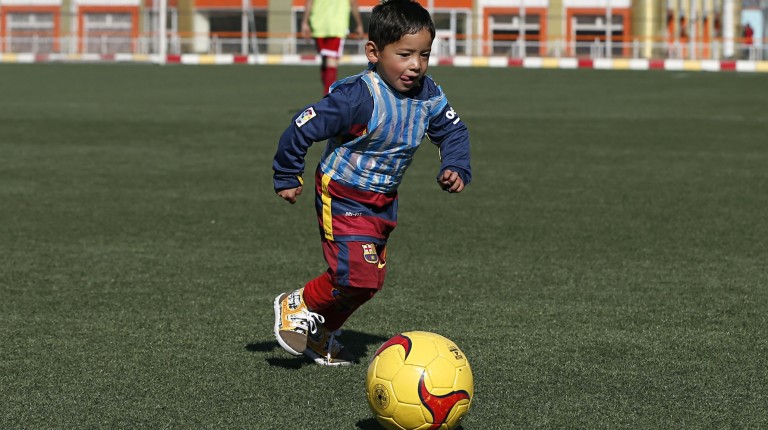 Murtaza Ahmadi, a five-year-old boy from the Ghazni province in Afghanistan, adores football and is obsessed with Argentinean superstar Lionel Messi.

Murtaza begged his father to buy him Messi’s team shirt for the Argentinean team. Unfortunately, his father simply couldn’t afford it, so Murtaza had to improvise: he created a “t-shirt” out of plastic bags featuring the same colours and design as the Argentinean team kit and adorned with his favourite player’s name.

The photo of Murtaza wearing the plastic team kit went viral on social media networks. Murtaza’s father’s Arif spoke to the media about this, saying: “He really loves Messi and football so much. We are unable to buy him a jersey;  I am just a simple farmer. So the kid decided to make his own from plastic.”

He added that Murtaza knows that he has become famous and is “extremely happy about it”.

The Afghanistan Football Federation (AFF) heard about the young boy’s story and gave him the opportunity to play with their youth team. The AFF also plans to set up a meeting between Lionel Messi and Murtaza, who has become an internet sensation over the past few weeks.

AFF spokesperson Sayed Ali Kazemi said they hope that Messi can visit Afghanistan. If not they will arrange to send Murtaza to Barcelona to meet his hero.

Investment conference to be held in Alexandria to present 35 projects worth EGP 40bn: El-Messiry