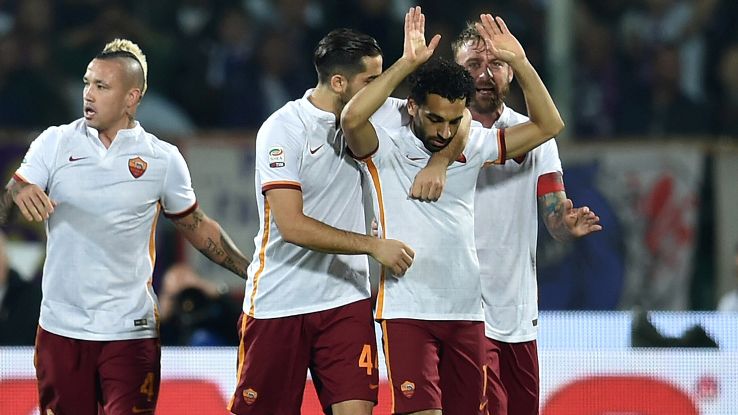 Egyptian international superstar and AS Roma forward Mohamed Salah scored a goal for AS Roma against Sassuolo in round 23 of the Italian league Tuesday.

Salah ended a three-month streak, in which he was unable to score a single goal since 25 October 2015 when he scored against his former Italian club Fiorentina. This was followed by a decline in his performance where he failed to score even before he suffered an injury during the Roma derby against Lazio.

Salah scored a wonderful volley in the 11th minutes, opening the score sheet, and giving AS Roma the lead before his fellow half-Egyptian teammate Stephan El-Shaarawy scored in the final moments of the game, killing it in the 94th minute. The two gave AS Roma a major boost in the Italian league table, coming in at sixth place, with 41 points.

Salah, who is known for being fast and creative with blistering pace in beating opponents, scored his sixth the goal in Italian league out of 19 games. He commented to Italian media on his recovery from injury and the team’s playing style, saying:

“Naturally I am very happy because my goal helped the team to win and that is the most important thing. I had my first serious injury and so it took a while before I could find my rhythm. I was used in a different role today, I felt at ease and I think I put in a good performance.”

Regarding a missed chance while his mate was unmarked, Salah said: “I apologise to Nainggolan because he really was unmarked. I tried to shoot from that angle but he was totally unmarked. We wasted too many chances, I admit that.”

Salah faced difficult times at AS Roma since his injury against Lazio, putting him under fire from media and fans in Italy while he was recovering, especially when he did not perform well in matches against AC Milan, Hellas Verona, and in particular Italian giant team Juventus. Salah nonetheless did show an excellent performance against them when Roma won 2-1 in the second round home game of the Italian league early this season.

However in the away game against Juventus, he was out of form since was the rest of the team. AS Roma’s new manager Luciano Spalletti responded to comments on his player’s performance in the Italian media:

“He’s been affected by his injury. He hasn’t rediscovered his brilliance and inspiration, again. The first thing he has to do is beat his man; that’s after last game against Sassuolo. He is good with the ball at his feet. We’re working on his positioning.”

However after Tuesday’s game, Spalletti was happy with the Egyptian forward, who caused endless problems for Sassoulo’s defence down the right of Roma’s attack all evening. He produced a fine goal from outside the box in the first half, after cutting inside, shooting past Sassuolo’s helpless goalkeeper Andria Consigli.

AS Roma will play against UC Sampdoria next Sunday at their home grounds Olympico in round 24 of the Italian league.

Mohamed Salah played 25 games with AS Roma this season, scoring seven goals in all competitions so far. As for the international level, Salah made 11 appearances for Egypt’s U-20 team and Egypt’s U-23 team, representing Egypt in both the 2011 FIFA U-20 World Cup and the 2012 Summer Olympics. He scored in all three of the team’s group matches in the latter tournament, helping them to get through to the quarter-finals.

Salah made his debut for the first Egyptian national team in September 2011   against Sierra Leone and managed to score his first goal for Egypt’s first team when Egypt beat Niger 3–0. He later scored a goal in the 93rd minute in the stoppage time against Guinea to give Egypt a critical 3–2 away victory in the 2014 World Cup qualifier. Salah played 40 games with Egyptian national team, in which he managed to score 24 times.