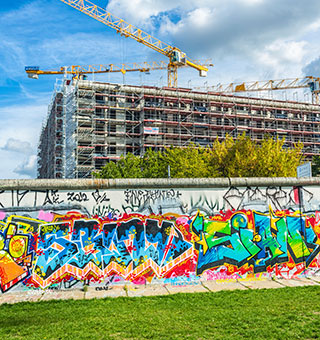 Macro changes in the international business environment will affect marketing content, application, context and acceptance. One prime example of adjustment success and failure is the reunification of East (GDR) and West Germany. The lessons learned from that experience might help transform other places, such as in Iran and Cuba.

Twenty-five years later, an entire generation has been exposed to new market interactions, orientations and rules. Here, we offer thoughts on the marketing environment, both as an influence on consumer behaviour as well as the context influenced by consumers.

When the Berlin Wall came down in 1989, GDR companies and products that had been protected by 60 years of state planning were taken over by Western companies, which often terminated East German products due to the fear of intra-company competition.

Market shares of all East German products dropped after unification, since people switched to West German products for their novelty and better quality. The next generation of the five former East German states (excluding Berlin as a city-state) experienced major changes: a declining and aging population combined with rising unemployment and relatively low average income.

Germans in the former East Germany have a different attitude toward marketing and advertisements, in particular. Most West Germans discount sensational advertisements, East Germans still regard them as primary information, which helps to explore options before making the purchase. Some might even feel betrayed when the promises of a product – such as looking like a model after eating chocolate bars – does not materialise.

On the product level, there are still visible differences, especially for white goods like clothes dryers, refrigerators and dishwasher. There is also a significant difference in Internet usage; all five eastern provinces are far below the German average.

Nowadays, the overall popularity of East German brands is improving again. Eastern products are overcoming the stereotypes of low quality and cheap price. The “good old things” from the past are again considered fashionable or hip. Many producers are using this wave of eastern reminiscences “Ostagia” to re-launch and expand their brands. The overall consumption patterns in East and West Germany are becoming increasingly similar. Lower Eastern incomes indicate lower prices there. Regarding alcoholic beverages, eastern products are becoming stronger and more recognised, such as Radeberger, Hasseröder and Köstritzer. Nowadays, both Eastern and Western German consumers describe their local brands as being “trustworthy”, “iconic and hip”, and “likable”.

At the same time, East German producers can count less on local patriotism as a defining characteristic of consumer behaviour. Studies show that local patriotism is a much stronger factor for consumers older than 40 than for those who are younger.

What are some principal insights that we observe after a major market disruption?

First, there is no shortcut for change and its acceptance. Eastern and Western Germany both presented optimal conditions in terms of available funding, capital flow and willingness to adapt. Nonetheless, one generation after, we can still observe key differences from both a geographic and an age perspective. The East remains socialist-oriented and its younger people are more likely to move and leave politics and socialism behind.

Second, there is a limited willingness to accept differences across former boundaries, which can lead to substantial discord. The current debate about substantially different migration expectations may serve as an example.

The often hesitant processes of realignment foretell delays and disagreements with nations such as Cuba or Iran as they undergo a major market disruption. There will be less enthusiasm than expected, leading to more delays and conflicts even if there is significant goodwill on all sides.

The success of a market orientation focused on competition, risk-taking, private property and profit typically improves lives and society over time. All this will occur by the choices devised and implemented by the private sector rather than the government. Less government interference in former socialist nations helps growth and innovation. Marketing’s encouragement of self actualisation can be the great reward for all.

Michael R. Czinkota is a professor of international business and marketing at Georgetown University’s McDonough School of Business. His book, International Marketing (with I. Ronkainen), is in its 10th edition with Cengage.

Margit Enke is a professor of marketing and international trade at Freiberg University of Technology in Germany and an expert in the fields of commodity marketing, emerging markets and brand management.