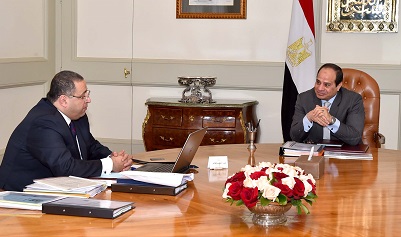 Salman had held several meetings over the past few months with the minister of local development, minister of social solidarity and all governors in order to create cooperation and coordination among them, Samir told Daily News Egypt.

The meetings also sought to reach an agreement on certain issues that can facilitate investment procedures and remove obstacles hindering new investments and preventing the expansion of existing investments.

“Follow-up and communication committees between the Ministry of Investment and governorates are accelerating the pace of economic activity by facilitating investment procedures, from establishing companies, to issuing licences and permits for operation and production,” Samir said.

The ministry is coordinating with the minister of social solidarity in order to connect employees’ insurances with the process of establishing companies in the investment complex at the General Authority for Investment and Free Zones (GAFI). Samir noted that this will help integrate the entire process of founding companies, through issuing the commercial registry, tax cards, and insurance folders in one place, aiming to enhance the investment environment in Egypt.

Samir said that the government is committed to respecting all its agreements, as well as maintaining equality among investors without any preferential treatment. Moreover, it will ensure that investors are able to transfer all their profits.

The government will also provide several non-tax incentives. These include the state bearing responsibility for the cost of labourers’ insurance, as well as granting lands through the usufruct system. This in addition to bearing the cost of the establishment of facilities on those lands, whether in remote areas or areas that require development, according to the inclusive growth programme adopted by the government.

Samir explained that the recent amendments to the Investment Guarantees and Incentives Law made all decisions by the ministerial committee for resolving conflicts binding for all governmental and administrative parties in the state, adding that during the period from August 2015 to January 2016, about 156 conflicts were reviewed.

The reform plan also includes applying certain standards to evaluate performance, and benefit from unutilised assets. The plan also includes implementing projects in cooperation with the private sector while developing various assets owned by companies, and turning them into productive assets.