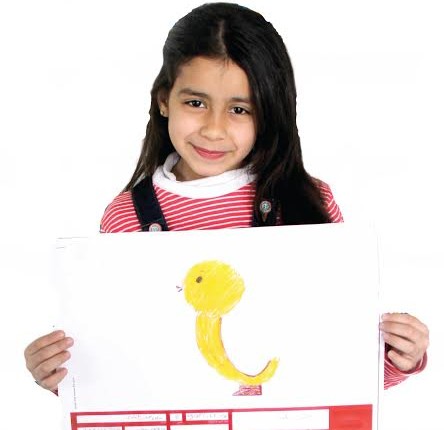 When eight-year-old Salma was practising her favourite hobby, drawing a little bird, she never imagined it would turn into a real toy for children worldwide, and a motivation for them to express their imagination in simple drawings.

Her drawing of a yellow bird with a big head and small legs became a part of the “Good Cause” Campaign, organised by Unicef and IKEA. The campaign aims to support education and children’s rights in unprivileged areas by turning children’s drawings around the world into real soft toys. For every soft toy sold during the campaign period, IKEA Foundation will donate a euro to children’s education projects via Unicef and the Save the Children programme.

In order to win, a competition was held in Egypt, Thailand, Indonesia, Spain, Hong Kong, Czech Republic, Finland, France, Turkey, and Canada. Over 55,000 children from these countries participated in the competition by submitting their drawings. Only ten children won the competition and IKEA factories are producing toys named after them.

“I love ducks so much, that’s why I’ve drawn one and named her Susu” Salma Said

“Salma was always fond of drawing ever since she was a little girl,” Salma’s mother Amany Al-Tohamy said. “I never imagined she’d win the competition, she was just drawing as she usually does, and birds are usually her favourite.”

“The number of designs we received is overwhelming,” IKEA Egypt Country Manager Adosh Sharma said. “The children’s personalities show through really strongly with their twinkling eyes, lop-sided feet, and wonderful combinations of strange features. They really just draw what’s in their head; they don’t copy from anyone.”

Judges described Salma’s drawing as “clear and exuding the spirit of a child’s imagination”. The toys will be sold across IKEA’s global stores.

According to Unicef, over 10 million children benefited from the Soft Toys for Education campaign since it was launched in 2003. Over the past ten years, the campaign supported over 90 projects in 46 countries and raised €57 m from sales of the toys.