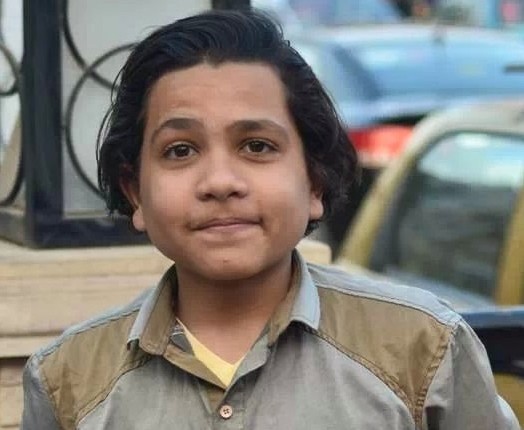 The case of Mahmoud Mohamed Hussein, who was detained at the age of 17 for wearing T-shirt emblazoned with the words “Nation without torture”, may be the most notorious case of a juvenile in pre-trial detention for the long-term.

However, his is not unique, with a number of other minors having been detained in the aftermath of the revolution.

On the third anniversary of the 25 January Revolution, Osama Abdelatty, 14, was killed in Mansoura when an anti-governmental protest was met by police forces.

Sohaib Emad, then 15 years old, grieved the loss of his friend Abdelatty and began to take part in protests. He was arrested in his house in Mansoura on 11 February 2014, based on a police report on his involvement in protests.

Sohaib was accused of possessing weapons, planning riots, targeting and resisting the police. After being arrested, his detention was renewed for 125 days in total, before his case was referred to the Mansoura criminal court. He will have been held at Dekernes Prison for two years on Thursday.

Now 17, Sohaib is resigned to a wheelchair; his leg failed to heal after a surgery for a displaced kneecap. Conditions in detention prevented the physical therapy from being successful.

According to a source at the Ministry of Interior, prison visits to Sohaib are not restricted, however, his family stressed that they were not allowed to proceed with the physical therapy.

“The surgery on his right knee failed as we could not continue the physical therapy,” Samar Maher, Sohaib’s mother, told Daily News Egypt explaining that he was taken back to prison directly following the surgery.

“Due to the conditions in detention, humidity, overcrowding and sleeping on the floor, his left knee now suffers the same fate,” she said.

Maher stated that when his right kneecap was displaced, it took prison authorities four months to grant permission for the surgery, after a request was filed to transfer him to a doctor.

“I can’t afford the visits for much longer; last week I paid prison policemen EGP 7,000 just to be able to visit him properly,” said Maher in a phone call on Sunday.

Sohaib has yet to receive a sentence in the case, which involves 42 other defendants. His lawyer Fawzy Nasr told Daily News Egypt that he filed reports to demand his release, based on his medical condition, but the court rejected the demand.