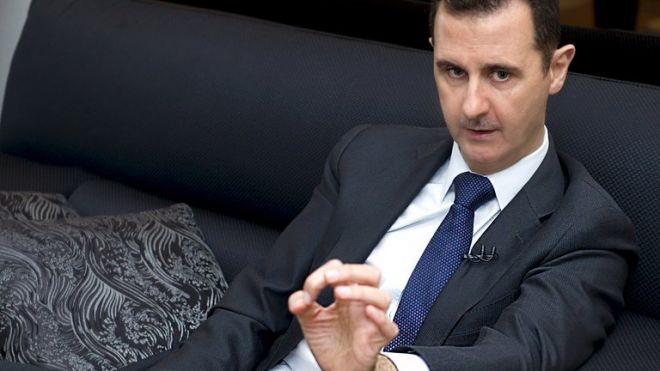 Saudi foreign minister Adel Al-Jubair said Saturday in an interview with a German newspaper that the Syrian President Bashar Al-Assad will not govern Syria in the future, and Russian intervention will not help him to stay.

“A man who murdered 300,000 persons, expelled 12 million and destroyed a country will not have a future in Syria,” said Al-Jubair to Süddeutsche Zeitung newspaper.

Al-Jubair moreover criticised the Russian intervention in the five-year Syrian civil war, saying that the will of the Syrian people to remove Al-Assad is “unbroken”, in spite of the Russian airstrikes.

“Now he called on the Russians, but they won’t be able to help him either,” Al-Jubair said.

Moscow says its strikes have targeted terrorist facilities and strongholds of both “Islamic State” (IS) and the Nusra Front.

With regards to whether ground intervention would be launched in Syria by the US-led coalition, Al Jubair said this issue is currently being discussed between the coalition members.

“If the coalition should decide to deploy special forces in the fight against IS in Syria, Saudi-Arabia will be ready to participate,” he said.

World powers participating in Munich conference said that a peace agreement cannot be achieved unless Russia stops its strikes on Syria.

In an interview with AFP, Syrian president Bashar Al-Assad did not rule out the possibility of a Saudi-Turkish intervention in Syria.

“The intervention of these countries is a probability which I cannot exclude for the reason that Turkish President Recep Tayyip Erdogan is known for his intolerance. He is a radical who supports the Muslim Brotherhood and lives with a dream of restoring the Ottoman Empire.

“We will certainly give them a resolute rebuff,” he said.

Al-Assad said he will not cease fighting terrorism, vowing to restore all of Syria, however noting that this will require time.

“France respects Russia and its interests … But we know that to find the path to peace again, the Russian bombing of civilians has to stop,” Valls said.

Medvedev however denied the accusations. “There is no evidence of our bombing civilians, even though everyone is accusing us of this,” Medvedev said.

He added that Russia is not trying to achieve some secret goals in Syria. “We are simply trying to protect our national interests.”

Shoukry discussed the recent agreements regarding providing support for humanitarian organisations to reach more Syrian cities with his Russian counterpart Sergey Lavrov on the sidelines of the conference.

Shoukry also discussed, with Iraqi prime minister Haidar Al-Abbadi, the recent developments in the fight against terrorism in Iraq.

Shoukry also met the UN envoy to Syria Staffan di Mistura. Both officials discussed the latest results of the Munich conference regarding the ceasefire in Syria.