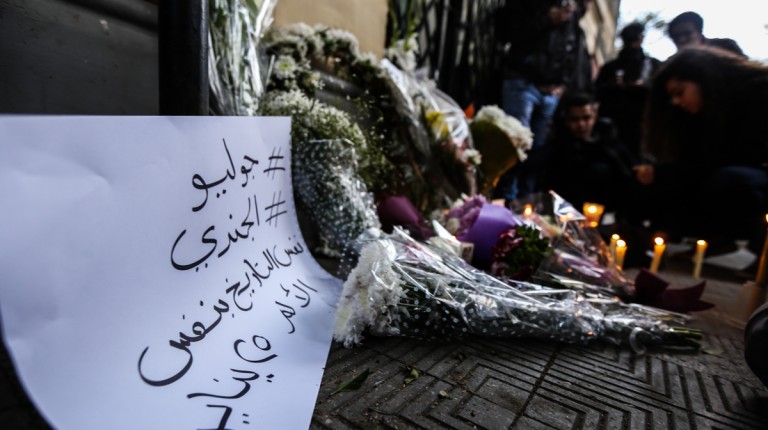 La Stampa Chronicles, a prominent Italian daily, reported the witness is a neighbour of Regeni, who testified that “the men who seized the researcher … were plain clothes police”, adding that a policemen allegedly came to the building three days beforehand to “ask questions and check our identity documents”.

The newspaper added that Regeni’s research, which focused on independent unions, might have “raised concerns”. The newspaper also criticised the appointment of General Khaled Shalaby to lead the investigation of Regeni’s death, citing Shalaby’s “disturbing past as a torturer and falsifier of investigative acts”.

According to the Egyptian department of forensic medicine, the initial autopsy results indicated that the main cause of death was blunt force trauma delivered by a sharp object to the back of the head that caused a cranial fracture and severe intracranial haemorrhaging.

Regeni, 28, was a PhD student at the University of Cambridge in the UK and had come to Cairo as a visiting scholar at the American University in Cairo (AUC) to research Egyptian labour unions. He was reported missing on the fifth anniversary of the 25 January Revolution. He was last known to be going downtown Cairo via the Behouth metro station.

On Friday, Regeni’s funeral in Italy was attended by thousands in Fiumicello, his home town.

Since Regeni’s body was found, several Italian media outlets have reported repeated accusations that Egyptian security forces arrested, tortured, and then killed him, seeking to extract information concerning labour unions and activists that he had collected in the course of his research.

However, Egyptian minister of interior Magdy Abdel Ghaffar denied the involvement of Egyptian security forces in Regeni’s death in a press conference last Monday. Abdel Ghaffar denied all speculation published on media outlets criticising the Egyptian police, and affirmed that “Egypt is treating Regeni’s case as if it were a case involving an Egyptian”.

Similarly, the spokesperson of the Foreign Ministry refuted statements made by human rights activists and academics about “arbitrary arrests, torture and disappearances” in the country.

German national, his son claim they were tortured in Al-Amreya police station

Egyptian coroner reveals preliminary cause of death for Giulio Regeni

Giulio Regeni: Piecing together the fragments of stolen life