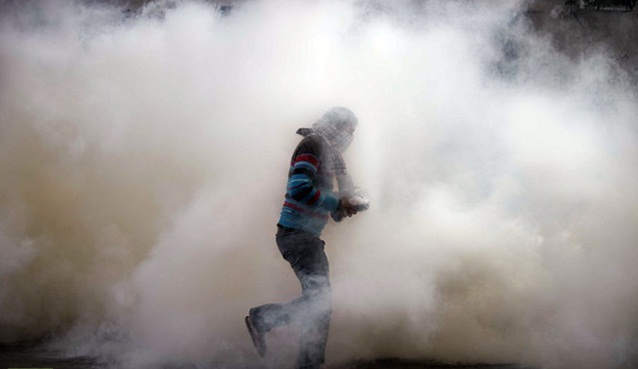 Using tear gas against inmates in a police station is a crime, perpetrators of which should be punished, human rights researcher Ahmed Mefreh said Sunday commenting on the death of inmate Mohamed Imam Saturday in the Al-Hawmdeya police station as security forces were trying to regain control during a jailbreak.

Mefreh said the usage of tear gas “is evidence of using excessive violence against inmates” and possessing tear gas canisters inside the station is illegal, that such weapons should not be used in excess especially in closed areas.

Egyptian police have been widely condemned for using excessive amounts of tear gas to quash protests and dissent.  The most notorious case was that of 18 August 2013, when 45 detainees were set to be transferred from Heliopolis police station to Abu Zaabal Prison. The detainees in the back of the transfer van allegedly caused a disturbance, which prompted the officers to fire a teargas canister into the van. Thirty-seven of the inmates suffocated in the back of the van.

The prosecution charged the officers with manslaughter since they were unable to prove criminal intent, which is a prerequisite in first-degree murder. The men were being transferred following a three-day investigation by the prosecution for to their role in the Rabaa Al-Adaweya sit-in, which was violently dispersed on 14 August 2013.

Mefreh said the incident at Al-Hawmdeya police station is further proof that “the excuses and justifications by security forces and are just fabrications of the truth”.

On Saturday, the Ministry of Interior said a brawl broke out between the prisoners in the police station, which led the security forces to fire a tear gas canister to prevent some prisoners from escaping.

Imam, who was accused of possessing an unlicensed weapon, died in the hospital after sustaining injures, the ministry said. Another 17 inmates were injured during the crackdown.

“At 2am, there was a fight in the detention cell. At first, the head of the investigation bureau poured boiling water on the inmates. When the fight continued, he threw a tear gas canister inside the cell,” Imam’s brother, Ahmed, told Egyptian local media.

He said another inmate died and was transferred to the Qasr Al-Aini public hospital. He was called by the police, who told him that his brother was in hospital: “We went inside and found my brother dead and covered by a sheet.”

In a separate incident, prisoner Abdel Rahamn Rushdi died Friday night in Toukh police station. Police said he suffered a mental breakdown, which made him act violently inside the detention area. The prosecution is yet to investigate the incident.

The police also said that Rushdi was a drug addict andaccused of possessing narcotics.

How protests and a blockade are crippling Nepal’s economy