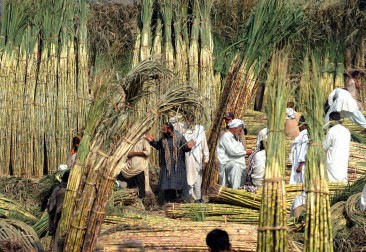 ESIIC met all demands of consumer complexes, he said. The company received all money due from the Ministry of Supply and the sugar producing company will start manufacturing after it receives sugar canes from farmers.

During the Capital Markets Conference, Minister of Supply and Internal Trade Khaled Hanafy said the company’s production is not well marketed even though it is one of the largest producers of sugar in the Middle East and North Africa region.

He said the ministry is planning on branding its sugar production and preparing a marketing plan for it. The company signed an agreement with a marketing company to help it follow the plan through, Abd El-Rahman said.

The company will export 42,000 tonnes of brown sugar to Kenya, the company’s executive revealed, and they are in talks with a Chinese company about constructing three paper manufacturing facilities using sugar cane bagasse.

Some farmers told Daily News Egypt that cultivating sugar cane has become a burden. In January, the delayed payment of the supply ministry’s dues to the sugar manufactures caused factories to fall behind on paying their workers and farmers.

“Sugar cane is not a crop anymore; it has become a burden on us,” a farmer in Nagaa Hamadi in the governorate of Qena, Mahmoud Labib, said. “They import sugar from abroad while our sugar is left in the company.”

He said that last year, ESIIC did not pay them from January until October and then only paid farmers 30% of their dues.

Earlier in February, Minister of Trade and Industry Tarek Qabil published a decision in the Egyptian Official Gazette ordering the cancellation of the protection fees imposed by the ministry on white sugar imports in April 2015.

The trade ministry had imposed temporary protection fees of 20% on white sugar imports, with a minimum of EGP 700 per tonne, until it completed its studies on the leap in imports in 2014 and the first quarter of 2015.

This decision follows the presidential decree issued late January to increase customs tariffs on some “luxury” products. The decision raised tariffs on imported sugar by 20%.

Logistic centres to be set up for agricultural crops in governorates: Supply minister