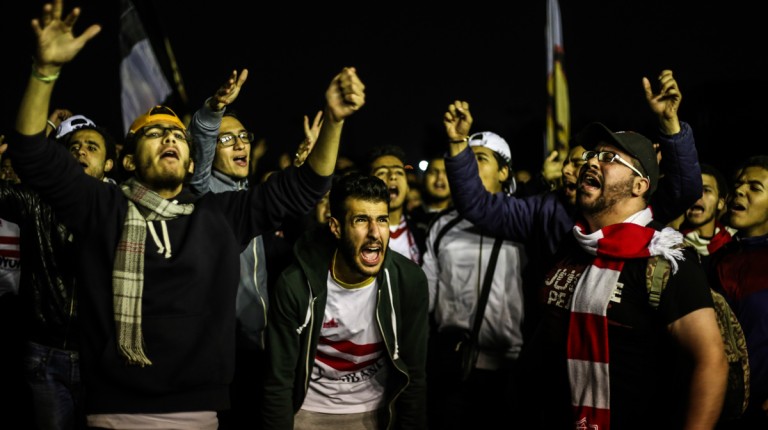 The Cairo Criminal Court appointed Judge Wagdy Abdul Moneim to oversee new investigations into the case publically known as the Air Defence Stadium clashes on Sunday, as the court determined that previously collected evidence is inaccurate and insufficient.

The trial of the 16 defendants who stand accused of initiating a riot that led to the deaths of 20 Al-Zamalek SC football fans will be suspended until the new investigations are concluded. Judge Abdul Moneim was given a maximum period of six months to complete the investigations.

“His decision means that not only will the suspects be re-questioned, but the judge will inspect new aspects in the case. The court’s choice to start over proved the lack of evidence and accuracy, which prevented the court from coming to a verdict,” said Fathi.

In a previous court session in November, Fathi said that the case documents are “ridiculous” and “far from the truth”, condemning what he described as “putting the victims on trial.”

Sunday’s session was scheduled for the hearing of eyewitness testimony in favour of the defendants, according to Fathi.

The court has heard from nearly 23 witnesses from the security forces, testifying against the defendants.

“Most of them either avoided answering questions or made statements conflicting with their accounts provided in official police and prosecution reports,” the lawyer continued.

Fathi said he was optimistic about the court’s desire to explore the incidents. “As much as I am concerned about proving  my defendants innocent, I am also eager to find out the truth about what happened,” Fathi said.

The defence team requested that president of Al-Zamalek club, Mortada Mansour, and former minister of interior, Mohamed Ibrahim, be brought in for questioning by authorities. “We will continue to scrutinise this case and present our evidence to the judge conducting investigations, in the hope of bringing in new suspects,” Fathi concluded.

The defendants are to remain in detention. The majority of them are being held in Tora prison. One of the defendants, who was assaulted and beaten in a police station following his arrest, has been released. Sayed Ali known as ‘Moshagheb’, a prominent Ultras White Knight,  started  a hunger strike to object his mistreatment in Al-Aqrab prison where he is being detained.

On 8 February 2015, an Egyptian premier league football match between Al-Zamalek SC and ENPPI took a violent turn as fans were attempting to enter the Air Defence Stadium, many were killed when security forces violently dispersed fans crowding the entrance to the stadium.

However, former prosecutor-general Hisham Barakat claimed that Muslim Brotherhood members provided the UWK with money and explosive materials to incite the riots and violence that led to the killings, in addition to attacking and injuring police forces and burning a police car.

Although no security officials are facing charges, several eyewitnesses and lawyers attributed the violence to security forces, who they claim aggressively dispersed the crowd of fans. Those trapped in the barricaded entrance to the stadium died from suffocation.

The Interior Ministry said violence occurred after Al-Zamalek supporters, known as Ultras White Knights, tried to attend the game without having bought tickets and also suggested that Muslim Brotherhood members instigated the stampede.