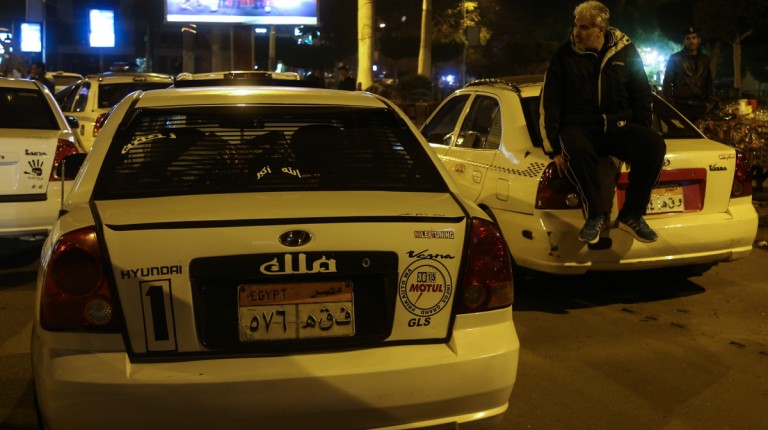 Despite widespread protest among local taxi drivers against Uber and Careem drivers, no legal action has been taken against either company so far.

Protest of taxi drivers has raised customer awareness about application-based car services. Careem driver Eid, 28, said that after the taxi drivers’ issue, their work load increased “more than ever”.

“People who didn’t know about us, now do, and they feel safe driving with us,” Eid said.

According to Eid, Careem drivers care about the users’ comfort and safety because they want to get high ratings after finishing the ride.

“I heard from my colleagues that police will withdraw our driving licences if they find that the service is Uber,” the driver said.

Last week, a white taxi driver ordered a ride on the Uber application; it turned out to be a trap to take the driver to a police station, questioning the legality of the service. Uber stepped in to ensure their driver’s release.

In the wake of this incident, Uber sent an email to its drivers to assure them that it will defend them if they are subjected to similar issues, according to an Uber driver in statements to Daily News Egypt.

The successful experience for both companies is no guarantee of their continuity at this point. A Careem driver said he criticises the company “for believing anything users say”, referring to customer complaints and low scores.

“After this recent issue, I experienced many users who created problems with me out of nothing to give me a low score … I suspect they may be relatives of white taxi drivers,” he said.

Another Careem driver projected a high turnover for the company’s drivers; according to him, they are originally not drivers and they joined Careem to increase their income.

“I also think the government allowed Uber and Careem to enter the Egyptian market because it benefits their personal interests,” he said.

Daily News Egypt tried to contact officials from Uber and Careem for comment, but was unable to get on-the-record responses.

The total value of investments of both companies in Egypt remains undisclosed.

Careem started operating in Egypt in December 2014. Since the start of their operations, Careem obtained $1.7m from STC ventures and $10m from Al-Tayyar. It operates in Jordan, Kuwait, Qatar, Bahrain, the UAE, Saudi Arabia, Lebanon, Morocco and Pakistan.

Since the inauguration of Uber service in Egypt in May 2015, the number of drivers has increased six-fold, according to Uber’s regional general manager for the Middle East, Africa and Central and Eastern Europe, Jambu Palaniappan.

He announced in November 2015 that the service will expand in Egypt to include cities other than Cairo.