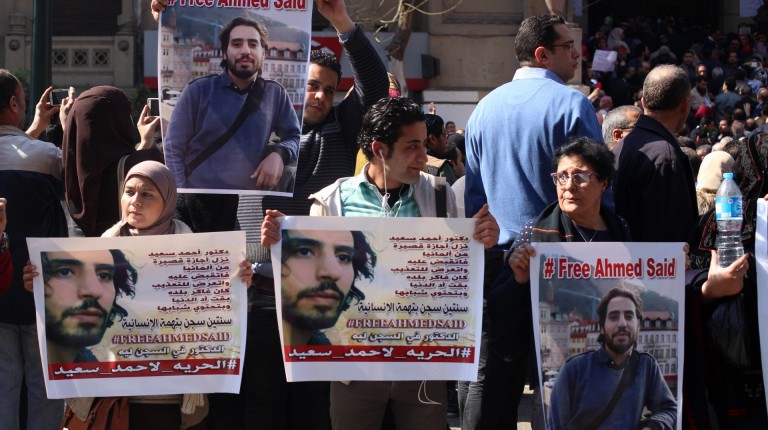 The Doctors Syndicate is preparing for its first act of escalation, promised at the last general assembly that was held to protest police assaults on doctors.

The syndicate board filed instructions to branch syndicate offices across Egypt on protests to be held at hospitals on Saturday under the title “Protests of Dignity”, according to a statement on Wednesday.

The instructions called for protest be held for one hour without disrupting workflow, while assigning a representative from the syndicate to each hospital to help organise the protests, and keeping any signs and chants professional, refraining from political slogans.

The general assembly, held at the syndicate headquarters on Friday, was scheduled after a group of officers allegedly assaulted two doctors working at Al-Matariya hospital.

An unprecedented crowd of more than 10,000 doctors gathered at the general assembly, where they decried police brutality, calling them “thugs”, and held up banners demanding the immediate trial of those who had allegedly assaulted the Al-Matariya doctors.

The assembly voted to approve a set of demands, which included referring Minister of Health Ahmed Emad El-Din to a disciplinary committee, and calling for his dismissal from the cabinet.

The assembly also approved demands calling for the provision of free medical care in public hospitals, the closure of any hospital that is subject to an attack, and the rejection of the health insurance bill.

They also demanded that the parliament issue a new law that protects doctors from assault. The assembly stated that if their demands are not met within two weeks, doctors will institute a partial strike.

The syndicate officially informed the Ministry of Interior on Monday of the protests “at all Egypt’s hospitals”, demanding measures to be taken to secure the protests.

A disputed protest law states that citizens who wish to hold a protest should send a written notification to the Ministry of Interior. The notification would include the details of the public assembly, including the names, addresses and contacts of all participants.