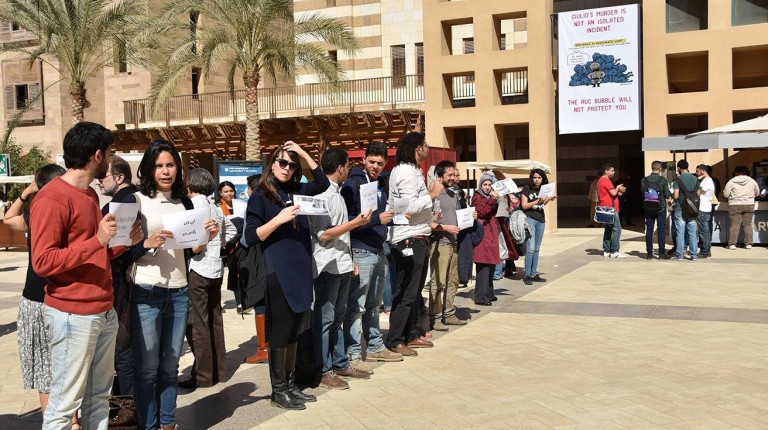 Amid the Egyptian Ministry of Interior’s continued denial of media reports suggesting the involvement of security agencies in the death of Italian researcher Giulio Regeni, the Italian team of investigators in the case awaits finalised analytic reports by the Egyptian Interior Ministry.

The hashtag #Regeni on Twitter has attracted numerous Italians, who have called for action against what they believe was a brutal torture and murder case, committed by Egypt’s security apparatus.

This prompted local reactions suggesting the involvement of a third-party in Regeni’s killing case.

The murder of Regeni, whose body was found in a ditch earlier in February with physical marks of torture, continues to be a pressing issue internationally, pressuring Italian authorities to seriously demand precise information from Egypt on the circumstances of his death.

Egypt’s sluggish response has in turn triggered major debate on the local level. Students from the American University in Cairo (AUC), where Regeni had been a visiting scholar, rallied on Wednesday, holding posters condemning the practices of the state security apparatus, which they labelled as oppressive to academic freedoms.

Their banners contained direct and clear indictment to the police, with a message intended to stress upon a more widespread and systematic crackdown than the isolated incident of Regeni’s death.

“As AUC students, we stand against the murder of our colleague Giulio Regeni and demand that our university administration do so as well. AUC must prioritize the protection of academic freedom rather than ‘security.’ We will not accept repression masquerading as security,” the students said in a statement Wednesday.

Ayah Abo Basha, one of the organisers of Wednesday’s protest, told Daily News Egypt Thursday that she and her colleagues feel constantly endangered, hearing about dozens of students killed on and off their university campuses, in addition to the arrest of thousands more.

“Students and academics in Egypt are living precarious lives – vulnerable to detainment, death sentences, and death itself. We understand that AUC’s walls, electronic gates, and security personnel cannot protect us in a state where the security apparatus sees academic freedom as a threat,” Abo Basha said.

“This must change. AUC boasts its commitment to civic engagement and social research. Yet, it exploits the students and faculty who do this work by leaving us physically and legally unprotected. Our universities must prioritise the protection of academic freedom rather than ‘security’. Otherwise, they will remain complicit in endangering their students and subjecting them to the possibility of the gruesome fate that Giulio Regeni faced,” Abo Basha stated.

According to Aswat Masriya, following Regeni’s death, the AUC administration extended its condolences for Regeni’s “passing away” to family and friends, in a statement published on 4 February.

However, the statement received wide censure from students and professors, who said Regini did not just “pass away”, but was “murdered and tortured”.

Moreover, a statement issued by the Ministry of Higher Education and published by state-media said “unnecessary trouble” was being made over “an accident that occurs every day on a wider scale all over the world”. The statement claimed that the events were being manipulated into sham calls for human rights causes.

The ministry also stated that those mobilising for solidarity rallies and posting content on social media that is critical of the Egyptian governments are doing so without legal grounds or evidence for their claims.

On the other hand, scepticism abounds as to whether the Egyptian authorities will provide Italy with “satisfactory” results. An article published Wednesday by the Economist said the Egyptian government appears to be “dragging its feet in the case of Mr Regeni”, despite the participation of Italian officials, citing unsolved cases that have made Egypt internationally susceptible, such as the killing of the Mexican tourists and the Russian plane crash.

Investigations into Regeni case are conducted by Egypt alone: prosecution

Egyptian coroner reveals preliminary cause of death for Giulio Regeni