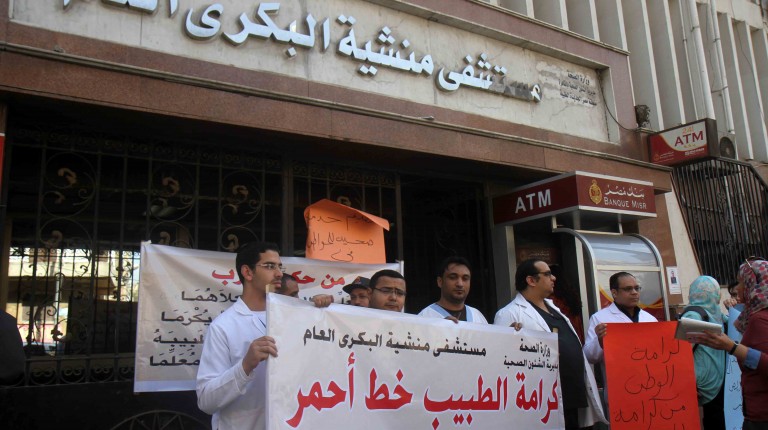 The Doctors Syndicate organised a protest Saturday, called the “Dignity Protest”, condemning the violations against doctors on their jobs.

Doctors nationwide demanded an immediate end to the series of violations against them, as part of the escalatory measures the syndicate announced against the Ministry of Interior for failing to take immediate legal action against the officers who allegedly assaulted two doctors in Al-Matariya Teaching Hospital.

The general assembly that was formed by the Doctors Syndicate earlier in February called for a one-hour protest Saturday morning before doctors started their work day, to condemn the assaults and violations against doctors on the job.

Syndicate board member Hany Mehanna told Daily News Egypt their main demands are the immediate trial of the police officers who assaulted the doctors and the securing of hospitals. The House of Representatives should take an initiative and consider a law that criminalises violation against doctors, he said.

“If there is no response to our protests Saturday, doctors will start a partial strike in all hospitals on 27 February and will only provide medical services to the citizens in the reception areas of hospitals,” Mehanna said.

Approximately 10-15 doctors protested in several hospitals, including Al-Matariya Teaching Hospital, where they protested for a short period not exceeding 20 minutes before going back to work.

Minister of Health Ahmed Emad El-Din Rady said the ministry made sure there would be no interruption of medical services provided to citizens during the one-hour protest. He also issued orders not to suspend work at hospitals and to hold the protests without disrupting the workflow.

However, Emad El-Din himself was referred by the syndicate to the syndicate’s disciplinary committee by popular vote during the general assembly, for failing to safeguard the rights of doctors.

The Dentists Syndicate also scheduled a general assembly on 4 March in solidarity with the Doctors Syndicate, which they declared is free of political motive.

The general assembly held in the headquarters of the Doctors Syndicate earlier in February called for protests in solidarity with the assaulted doctors and to call for the end of violations against doctors. It officially notified the Ministry of Interior about the protests and demanded it secure the hospitals. However there were no security forces around the hospitals during the protests.

The clash between the Doctors Syndicate and the Ministry of Interior started in January, when two police officers allegedly assaulted two doctors at Al-Matariya hospital while on the job.