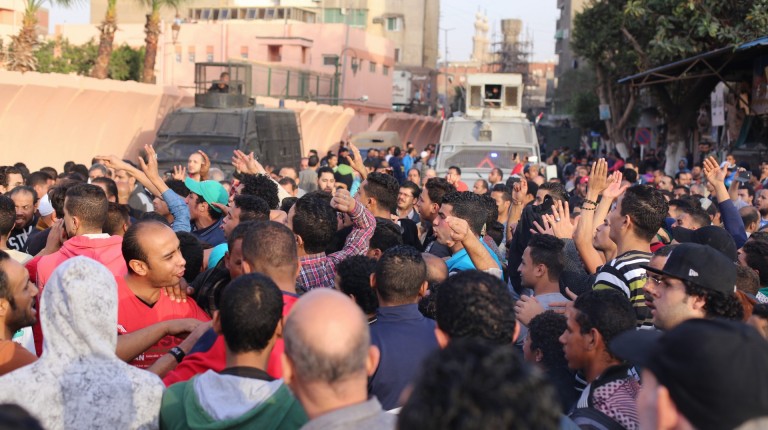 The South Cairo Incidents Prosecution issued a four-day detention order for the police officer accused of killing a truck driver in the district of Bab Al-Khalq in Cairo on Thursday night.

Truck driver Mohamed Ismail was shot and killed following an argument with the accused police officer. Several onlookers quickly gather to the scene and assaulted the police officer, causing him minor injuries. He fired his weapon into the air to disperse to the crowd, according to a statement from the Ministry of Interior.

The prosecution has accused the policeman of intentionally killing Ismail.

Thousands attended Ismail’s funeral in solidarity with the victim and his family. Those in attendance decryied the Ministry of Interior and the accused police officer.

In response to the incident, President Abdel Fattah Al-Sisi met with Interior Minister Magdy Abdel Ghaffar to discuss the case, according to a statement from presidency spokesman Alaa Youssef.

Youssef announced that Al-Sisi ordered Abdel Ghaffar to prepare legislative measures to guarantee the accountability and performance of security forces operating in civilian areas. Al-Sisi ordered these preparations be ready within 15 days, at which point they will be submitted to the parliament.

Al-Sisi confirmed the power granted to security forces primarily intended to preserve safety and security requires mutual respect from both sides, according to Youssef.

Youssef described that widely reported recent cases of police violation as irresponsible acts that affect the reputation of the National Security Apparatus.

Protestors demonstrated in front of Cairo’s Security Directorate. The governmental agency issued a statement claiming that the police officer had accidentally killed Ismail. Protestors chanted: “the police are thugs.”

There were four reported cases of assault by police officer that garnered widespread critical censure on social media and from human rights activists.

The Ministry of Interior has repeatedly denied accusations of systematic and widespread abuses of state power.

We should not hold entire police authority accountable: Prime Minister