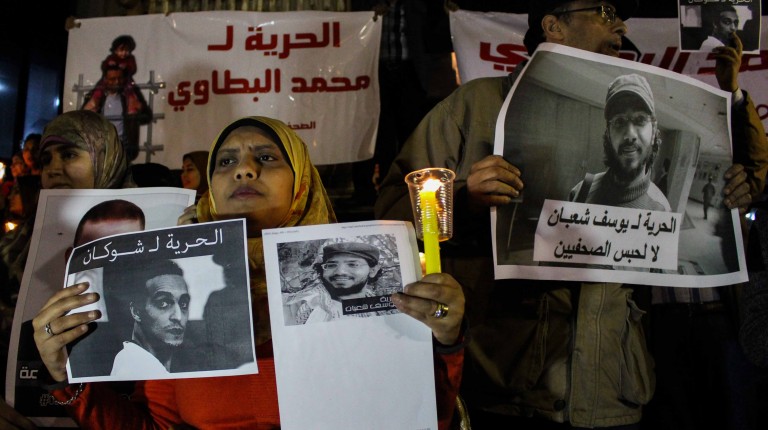 Dozens of family members gathered in front of the Press Syndicate Saturday to protest the treatment of their detained relatives, as well as demanding “fair trials” and “an end to the death sentence”.

During the protest, which was organised by various associations, relatives raised banners with photos of the detainees and narrated the alleged violations. Other protesters told stories of the “complaints and sufferings” of the detainees of the Al-Aqrab Prison to the public.Some families held up photos of their missing relatives and called upon the Ministry of Interior to reveal their whereabouts. Other demonstrators were relatives of the defendants accused of plotting to bomb the Kafr Al-Sheikh Stadium in 2015. Most of the defendants were sent to military court and received death sentences. The families say that their relatives were outside the governorate during the incident.Al-Aqrab Prison was built in 1993 under the reign of notorious minister of interior Habib Al-Adly and hosted many political prisoners and high-profile inmates accused of being involved in terrorist activities. It continued to be used to host defendants accused of violence and terrorism.

Amnesty International published a report in 2015 stating that over 41,000 people were arrested, indicted, or sentenced as part of the government’s suppression of political opponents and activists since the 25 January Revolution in 2011.

Human Rights Watch reported January 2015 that 22,000 people, including activists and journalists, have been arrested since July 2014 for stating their opposition to the government.

According to the Egyptian Commission for Rights and Freedoms, there were at least 215 cases of enforced disappearances across the country in August and September 2015. During the first eight months of 2015, 1,250 cases were recorded with 1,411 cases in the first 10 months. Only 332 of 1,411 cases have been resolved when the location of those disappeared was revealed.