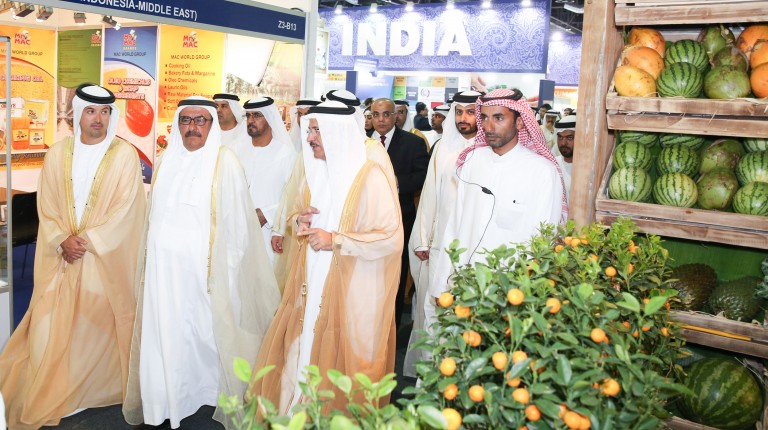 The exhibition events are planned to continue until 25 February and are expected to draw a record trade attendance of more than 85,000 visitors. The exhibition will be attended by more than 5,000 international companies from 120 countries and 117 commercial and industrial pavilions. It is held on the area of 1.29m square feet in three new halls in Dubai World Trade Centre called Za’abeel 4, 5, and 6 – and two purpose-built temporary structures.

Senior Vice President of DWTC Trixie LohMirmand said Gulfood connects trademarks, local policy makers, innovators, and world leading companies in the industry of foodservice and hospitality. It also facilitates trade dealings worth millions of dollars by bringing together the leaders of global food industry and their involvement in trade business and discovery of new products in Dubai.

Imports from countries of the Gulf Cooperation Council (GCC) amounting to $53.1bn, according to the economic research unit of The Economist magazine. Gulfood has been an attraction factor for a large number of pavilions specialised in the food industry throughout the history of the exhibition. This year sees the participation of 117 pavilions, with an increase of five pavilions compared to last year.

The pavilions include contributions from Russia, Costa Rica, Belarus, Mauritius, and New Zealand, which has finally returned after a lapse of six years.

The list of participants – whether under the umbrella of global pavilions or as independent companies – includes finished food producers, bulk commodity wholesalers, distributors and exporters, as well as a large collection of hospitality equipment suppliers.

Gulfood 2016 features the Halal World Food Show, the largest annual event in the field of global halal food trade, where more than 800 companies specialised in halal foods participate with an increase of 15% compared to last year. They compete to acquire a market share worth $2.537tn by 2019, according to the latest Global Islamic Economy Report.

In terms of the retail sector and services of food, supply, and hospitality, Gulfood represents a great opportunity to offer thousands of new products and innovations in the field of health and diets, according to LohMirmand.

Accompanying the exhibition in the first three days is the Gulfood Conference, which started its programme with the food and beverage business forum in the Dubai World Trade Centre where experts discussed the critical issues that affect the performance of companies with the growth of the food and beverage sector in the region.

Gulfood 2016 hosts hundreds of cooking shows during the distribution of the International Salon Culinaire Awards ceremony, an exhibition of the best talents and expertise in the world of gastronomy in the region.

This year, the Salon Culinaire, one of the shows at Gulfood that is addressed to major chefs, bakers, and pasta makers, will be attended by more than 1,300 chef experts. These experts will be assessed by a jury of 25 famous experts. This is commissioned by the World Association of Chefs’ Societies.

As part of the Culinaire Salon this year, three major US trade organisations are preparing to make cooking shows of American flavours led by Chef Joey Troyks, born in Louisiana, and served as executive chef in the Bay of Dubai restaurant at The Dubai Mall.

These organiaations are USA Poultry and Egg Export Council (USAPEEC), US Meat Export Federation (USMEF), and the US Dairy Export Council (USDEC). The opening show was attended by Deputy Under-Secretary of the US Department of Agriculture Alexis Taylor.

“The flavours of America in the Gulfood prove the success of the public-private partnership (PPP) between the US Department of Agriculture and the US agricultural trade organisations such as USAPEEC, USMEF, and USDEC,” Taylor said and that the shows point out the high quality of US agricultural exports worldwide.