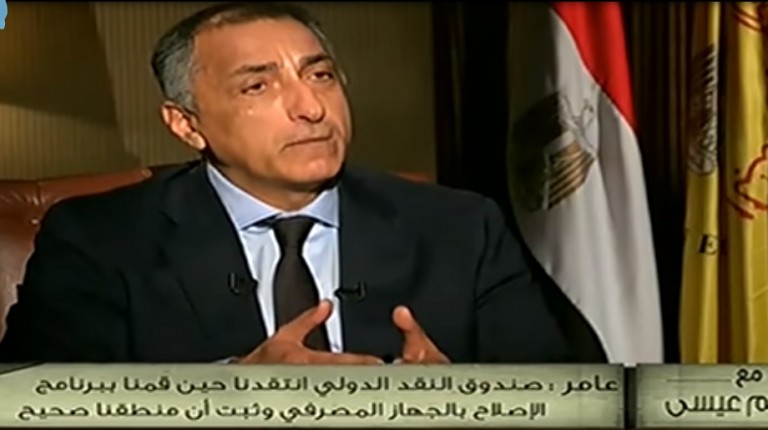 The Central Bank of Egypt (CBE) will consider floating the local currency when foreign reserves hit between $25bn and $30bn, CBE Governor Tarek Amer said in a televised interview on Sunday.

Speaking to TV host Ibrahim Eissa, Amer stressed the unlikelihood of floating the Egyptian pound against the dollar currently, in light of the decline of foreign exchange reserves to $16.5bn by the end of January.

The CBE adopted a number of bold decisions recently, aiming to adjust the foreign exchange market and organise import operations, which have consumed the bulk of foreign exchange over the past three months.

According to Amer, Egypt suffers from unregulated import operations, which required immediate confrontation.

He explained that Egyptian imports amounted to approximately $50bn by January 2011, and have ballooned to $76bn currently.

Approximately 20% of importers submit falsified import bills at lower than their actual prices, raising the actual value of imports to approximately EGP 90bn, in addition to smuggled goods valued at approximately $9.6bn.

In the same context, Amer urged the private sector to be patient and support CBE’s decisions to overcome the current crisis.

The CBE governor vowed to resolve the dollar crisis and the transfer of investors’ profits abroad in 2017.

“I met with more than 300 foreign and Egyptian companies, and listened to their complaints. They expressed satisfaction regarding the decisions we have made,” said Amer.

The largest 100 companies in the private sector recorded revenues of approximately EGP 240bn and profits of nearly 14%; such performance cannot be replicated in any other country, he claims.

Amer further affirmed that the CBE coordinates with the government in all its decisions, irrespective of disputes that may occur between the CBE and some members of the government.

The Ministry of Finance has not agreed to raise the value of the dollar to EGP 8.25 in the state budget for fiscal year 2016/2017. CBE is the only authority entitled to set the exchange price.

Amer stressed that Egypt will not go bankrupt, noting that foreign debt is still within the safe limits, at approximately $45bn, constituting less than 15% of GDP.

CBE Governor denies he was dismissed after accepting post at IMF

Egyptian economy will not be affected by dollar crisis: CBE Governor