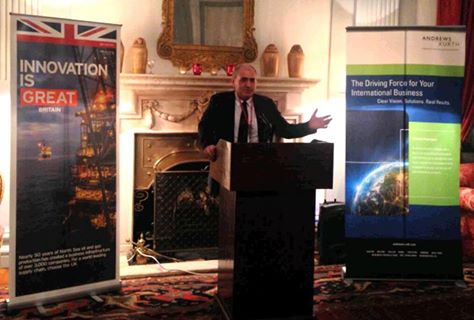 The delegation of companies, hosted by UK Trade and Investment (UKTI) in Cairo, will stay for one week, according to a press statement from British Embassy in Cairo.

British Ambassador in Cairo John Casson said this visit is further evidence that Britain and Egypt are ideal business partners, and another example of Britain’s huge investments in Egypt, like those of BP and BG.

Casson said the delegation’s visit is important as these companies have the experience to help Egypt utilise its new discoveries and harness the energy to boost its economy.

Director of Africa and Middle East at the Energy Industries Council (EIC) Terry Willis said Egypt is a key market for leading British companies working in the oil and gas sector.

Willis and the delegates are set to meet representatives from BP, Eni, and Petrojet as well as the Egyptian Electricity Holding Company (EEHC), the statement read. Willis said Egypt has emerged as a new key target for UK companies after recent field discoveries and a more stable government.

The eight companies visiting Egypt offer a range of technologies to help operators develop their assets in the energy sectors.

The EIC delegation to Egypt comes shortly after the visit of UK MP Jeffrey Donaldson earlier this month, his first in his new role as UK prime minister David Cameron’s Trade Envoy to Egypt.

BG and BP are two important British energy companies, which together have invested almost $40bn in Egypt.

British businesses must be partners of choice for Egypt’s energy future: Donaldson