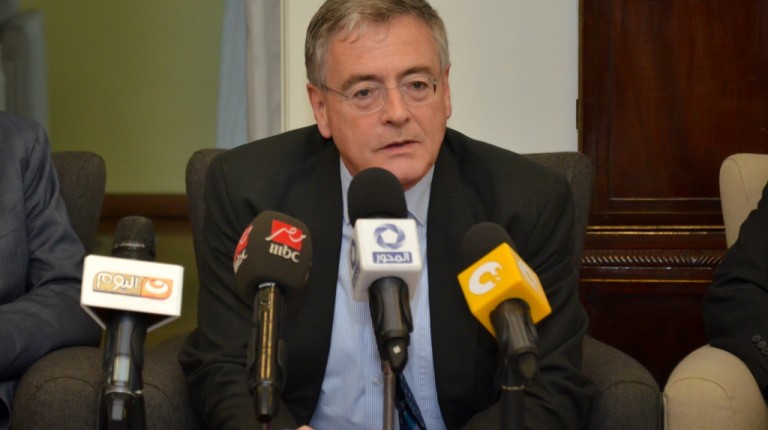 German Ambassador to Egypt Julius Georg Luy said German organisations in Egypt are credible, trustworthy, and have been successful in their work.

In his first press conference, Luy told journalists he does not have any doubts about the activities of German NGOs or governmental bodies, such as the Deutsche Gesellschaft für Internationale Zusammenarbeit (GIZ). Egypt always asks for more activities.

“All German institutions work transparently and are subject to surveillance in Germany; nothing is secret,” Luy said. If there is a problem in some content then it must be discussed.

Egyptian-German relations have three main points: traditional diplomatic ties between both governments; economic relations between the governmental or private sections; and the relation between the civil societies in both countries.

Luy said civil society interaction is the keystone of the relationship between countries if the formal relation was interrupted. Germany always works with Egypt to provide the German organisations a proper atmosphere to work in. “We are touched that Egypt is keen to achieve that,” he said.

Recently, there is only one political German NGO working in Egypt, the Friedrich Ebert Stifftung, while Friedrich Nauman Stifftung decided to move its regional office to Jordan.

Luy said those NGOs do not work against the local government by any means but try to form a dialogue to find a solution for local problems and challenges; they do not represent the official sector in Germany.

When asked about Germany’s estimation of the security situation in Egypt, Luy referred to the new security measures taken by the embassy to reflect their concerns, especially after the attack on the Italian consulate in 2015.

He said however that Germany never stopped any flights to and from Egypt after the Russian plane crash in October 2015. “Germany did not suspend any kind of flights … Sharm El-Sheikh still needs some logistic measures. We just asked air companies to move the luggage in different planes but this was an additional cost for them,” he said. Currently there are almost 20,000 German tourists in Hurghada.

Regarding German investments in Egypt, this sector is important as investors must feel safe. They also should be able to move their benefits outside Egypt, Luy said. Bureaucracy and corruption are also considered as problems in this sector.

Regarding joint collaboration for counter-terrorism efforts, he said this topic was discussed several times between Egyptian president Abdel Fattah Al-Sisi and the German chancellor. This topic should also be discussed widely between countries and that intercepting terrorism funds is a must to address this issue.

German interior minister Thomas de Maizière will visit Egypt soon to sign a joint security agreement between both countries to address terrorism and illegal immigration according to Luy.

In Video: Germany works with Egypt to provide German organisations with proper atmosphere to work