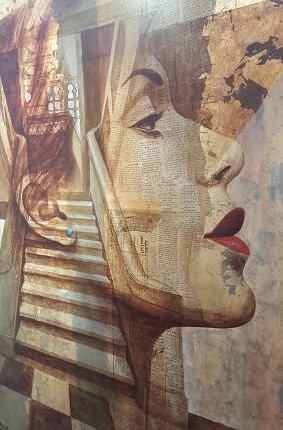 Just as ones passes through the arabesque doors of Safarkhan Gallery, a wire sculpture of a woman is stood there, with captivating eyes and an emotive expression.

Karim Abd El-Malak is a local visual artist and illustrator who chose to support women through an exceptional mixed-media exhibition. The artist’s series of paintings and single sculpture narrate the silent stories of many Egyptian females who face prejudice, harassment, and sexism every day.

“I chose this name, Soul, because women are half of our society. Meanwhile they raise the other half and therefore they are the entire society; its soul. Unfortunately our community highly neglects the importance of women. Any healthy and respectable society has to offer its women intellectual liberty, and sadly women in our country are currently afraid of walking in the streets due to the increasing levels of harassment,” Abd El-Malak said.

The artist divided the exhibition among a few interrelated concepts, focusing on local monuments and meaningful symbols. A few of the paintings aimed to link the current marginalisation of women to the neglect of historical buildings.

“For example, El-Sakakiny palace has become a garbage dump. The palace’s last heir gave it to the country, which turned it into an administrative building under the umbrella of the health ministry,” Abd El-Malak said.

El-Sakakiny is not a rare case; a number of other palaces have been completely forgotten by both government and citizens. In addition to the buildings, he also captured other monuments through his art as he focused on the country’s Pharaonic legacy in some of the paintings.

“I tried to create an artistic contrast between Sphinx’s powerful grace and the woman’s obvious vulnerability. Our history was originally built by women; many women have ruled our country but all of that has changed now,” he said.

In his paintings, women are portrayed as vulnerable due to his belief that women are currently marginalised in society, facing different forms of harassment on a daily basis. He also featured the iconic Mostafa Kamel statue to indicate the severe fragility and deterioration of women’s status in today’s society.

“Two of the paintings featured Mostafa Kamel’s statue against the portrait of a woman. In the first painting, the statue is captured from an ant’s point of view to give it greatness; meanwhile, the woman is looking downwards with evident vulnerability,” he said.

In the second painting however, the statue is pointing at the woman to indicate her importance.

Abd El-Malak dedicated two of his paintings to his late father, who passed away right after the 25 January Revolution in 2011. “My father was an artist as well and this is my first exhibition after his death. Therefore I wanted to pay him homage through using his old letters.”

He aimed to artistically render the continuity of his father’s legacy through the letters that he wrote to his wife during his residency in Rome. The exhibit was chosen in Safarkhan due to the gallery’s importance and impact on the artistic scene in Egypt. The public’s feedback has been tremendous and most of the paintings have been sold, he said.

“Safarkhan is a big name and a pioneer in this field. The space might be small in metres but it has featured the biggest names of abstract art in Egypt. The owners, Sherwet and her daughter Mona Said, are true experts; they are selective and they appreciate art as well as culture,” Abd El-Malak said.

Mahinaz Soliman: an artist who blends reality with surrealism

Street art breaks through the walls of traditional galleries