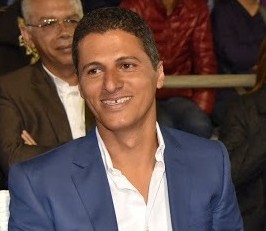 Tourism has been in decline for the past few years in Egypt due to security reasons, especially in its most vital touristic cities: Hurghada, Sharm El-Sheikh, and El-Gouna. To boost tourism, El-Gouna, developed and owned by the Sawiris family, Samih Sawiris, and Orascom Hotels and Development, will host the 2016 El-Gouna International Squash Open.

On the occasion of this tournament, which will be held from 21 to 29 April, Daily News Egypt interviewed  Amr Mansi, Founder and CEO of IEvents who is responsible for organising El-Gouna International Squash Open tournaments.

Tell us about your history in squash.

I was a squash player from 2002 until 2010. I started playing at Smouha Club and then in 2008 I moved to the Sporting Club. My highest international ranking was 46th.

I am currently the squash technical director at the Sporting Club and trainer for members of the Egyptian national squash team in Alexandria.

Tell us about your victories as a trainer with the Egyptian national team?

I won the 2014 Women’s World Junior Squash Championships which in Windhoek, Namibia from 10 to 15 August.

I was the trainer of Habiba Mohamed, who won the championship. Nouran Mohamed Gohar came in second place, Mariam Metwally in third, and Nour El-Sherbini in fourth.

Afterwards we met President Al-Sisi as a part of the Egyptian national team, who honoured us and we received the First Degree Sports Order.

You mentioned that you stopped playing squash in 2010; what were your reasons?

I stopped playing so I could develop the sport in Egypt in another way. My intention was establishing the biggest international squash championship in a place that would reflect the beauty of Egypt abroad, since it is already very developed in the sport.

And here we are, El-Gouna International Squash Open has become one of the seven largest international squash championships for professional players and the only one that is held in Egypt. It all started in 2010 and every year has seen improvements.

Tell us more about IEvents.

I established it in 2010 to organise squash championships. Since then, I have been organising El-Gouna International Squash Open annually. Last year, I organised two tournaments; one for men in El-Gouna and the one in Alexandria for women.

As an organising committee and a hosting country, we have the right to directly nominate a player to be one of the best 24 international players.

Tell us about an example of an Egyptian champion who improved their ranking due to a squash tournament you organised.

The governor of Alexandria attended the 2015 El-Gouna International Squash Open’s final; he was so impressed that he asked me to organise similar tournament in Alexandria.

It succeeded and Raneem El-Weleily won Alexandria’s tournament. Thanks to this victory, her international ranking jumped to first.

Which players are participating in Al-Gouna’s upcoming tournament?

There are 56 players, from 20 to 24 countries, who will participate. Generally the participating countries are Egypt, Qatar, Australia, the UK, France, Germany, Spain, Malaysia, Hong Kong, the US, Canada, Colombia, Mexico, and Peru.

According to the International Squash Federation, the world’s top eight players must participate.

After several unfortunate incidents that led to a decline in tourism, do you fear a possible attack during the tournament?

Concerning security threats, the International Squash Federation assigned a consulting security company to be responsible of every single safety detail including the players’ transportation and accommodation.

Also keep in mind that El-Gouna resort is somewhat of a closed space.

Who is sponsoring this tournament?

These tournaments cost a lot. Each year we need to expand advertising nationally and internationally, improve the set up for the place, entertainment, and the organisation itself; so we need many entities to financially participate.

The ministries of Youth and Sports Affairs and Tourism, Carrier, Euronews, OTMT, Beltone financial,  Daily News Egypt, Alborsa News, and Arab-African Bank are our sponsors. This is the fourth year for the bank and Carrier to sponsor these tournaments. Euronews is owned by Naguib Sawiris, which decided to participate after witnessing how successful the tournament became. OnTV and Pharco Pharmaceuticals sponsored the tournament last year.

Aside from the financial benefits to the above mentioned entities, these companies and Naguib Sawiris aim to improve the sport in Egypt since their national squash players are world champions.

Tell us about the Ministry of Youth’s role which led the tournament to such a high level on the international scale?

Aside financial support, and thanks to Minister of Youth and Sports Khaled Abdel-Aziz, we signed a contract with the Professional Squash Association for El-Gouna International Squash Open last year to become one of the seven biggest international squash tournaments.

Tell us more about the ministry’s role in promoting tourism in Egypt through the tournaments.

For about one or two years, the ministry established a department called sports tourism.  This department focuses on sports’ events that include sports like squash, kite surfing, diving, and tennis which are held in touristic areas like Sharm El-Sheikh and Hurghada to market for these events abroad.

Now the department director, Ehab El-Ebiary, is planning to invite foreign reports in a press conference to cover El-Gouna International Squash Open Championship to market for the event abroad.

What about the Ministry of Interior Affairs’ role?

Its role is to maintain security. Red Sea Directory and Red Sea Governor always support us each year; they secure the players’ arrival, their stay at the hotel, and secure the audience and the players during the game.

Can you mention any other famous squash championships?

How could this tournament improve tourism in Egypt?

As El-Gouna tournaments is one of the most prominent international squash championships, the International Squash Federation broadcasts it on 45 international TV channels including BeIn sports, Eurosport, and BT Sport in the US.

Imagine the audience abroad watching the tournament’s matches, where seeing the squash court surrounded by El-Gouna’s fantastic landscapes including the marina, and crowded by tourists. They will definitely believe that a country hosting a prestigious event like this is safe.

Euronews for example will not only broadcast the tournament’s matches but also it will broadcast reports about the whole event, which I believe will benefit Egypt’s reputation.

Keep in mind that every player is considered an ambassador to their country. Through their Twitter and Instagram accounts, they will share their experience in Egypt with their audience, which will improve the image of tourism in Egypt abroad.

Through these sports and similar art events, including the event who hosted the famous Greek singer Yanni at the Pyramids, we could recover tourism in Egypt and fight the unusual terrorism attempts that destroy the image of Egypt abroad.

Egypt has been accused of not paying enough attention to sports in Africa; what about the championships you organise?

The International Squash Federation is the entity that invites the players according their international ranking.

South Africa participated before. The problem is that Africa does not have professional players.

World squash champion Ahmed Barada attracted plenty of attention and now we have world champions, however, the sport is not given the same attention as before; why is that?

It is all about media. In the time of Ahmed Barada, he was the first famous Egyptian squash player and Hosni Mubarak was playing squash. There was only channel one and two. So when the squash championships were held, it was broadcasted through these channels and the entire country was watching them.

Mohamed El-Shorbagy and Ramy Ashour were invited to many TV programmes after their championships. This attention was not given to Egyptian sports champions previously.

Keep in mind that when the squash championship is held in Egypt, it is another story and media gives its full attention to the tournament and everything related to squash. You will see this during the 2016 El-Gouna International Open Squash.

Why it is squash not included as an Olympic sport?

There are three sports which were recently nominated for the Olympics, I think including skate boarding. These sports are not as famous as squash.

I feel that Narayana Ramachandran, the Indian squash administrator who currently serves as President of the World Squash Federation, has to do more to include the sport in the Olympics.