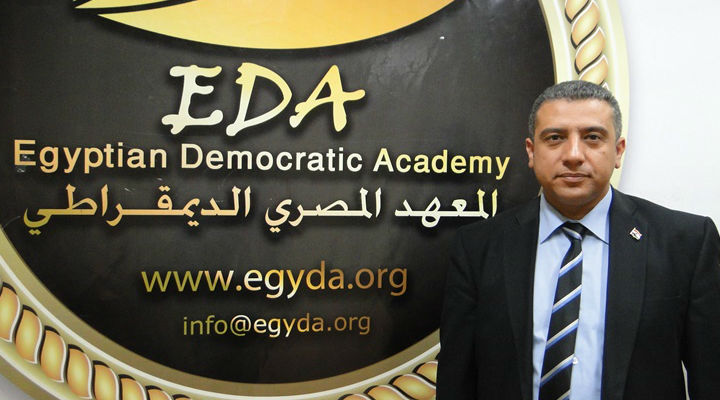 Head of Management Board of the Egyptian Democratic Institute Hossam El-Din Ali was prevented from travelling to the United States Saturday and was questioned for three hours over the telephone by a National Security Officer.

“For the second time, the regime has imposed a travel ban on me. I was invited by the US state department to attend an international conference to combat corruption through legislations, but authorities informed me that I am subjected to a travel ban,” Hossam said in a written statement published on his official Facebook page.

The investigative questions included the issue of foreign funding, the foundation’s work, his role in the Board of Directors, the reasons for his trip to the US, and VIPs he may meet during his travels, Hossam said.

Hossam was prevented from travelling for 16 months and was then told that the decision was issued by an Attorney General. He later discovered however that the ban was decided by the investigative judge on a foreign funding case. He said he has not been questioned or charged over this case over the past 16 months, which means the decision for the ban was applied within six months of its release. Hossam met with the investigative judge at his request, not the judge’s.

“Constitutional right to movement and travel is sponsored in all the constitutions of Egypt, but nowadays we see continued violation and I am still looking for a judge to complete investigations after months of violation of the right to mobility,” Hossam said.

About 20 local human rights NGOs were recently condemned a number of travel bans issued against a several political activists and human rights defenders through a joint statement issued in February. Organisations included El Nadeem Centre for Rehabilitation of Victims of Violence, the Association of Freedom of Thought and Expression (AFTE), the Egyptian Initiative for Personal Rights (EIPR), and several other groups.

“It seems the travel bans issued against many human rights defenders recently constitute an attempt to turn Egypt’s borders into a mass prison cell,” the statement read. “The frequency with which travel bans occur follows an ongoing series of restrictions on activists for more than a year.”

The NGOs called for the bans to be lifted since many of the verdicts against activists lack legal evidence.

Director of Arab Network of Human Rights and Information (ANHRI) Gamal Eid was banned from travel on Thursday. Airport authorities purportedly told Eid that the ban was due to a judicial order. He said however he did not receive any prior notifications regarding such a decision, according to an official statement by ANHRI.

Mid-January, activist Omar Hazek was also briefly banned from travel as he was departing to the Netherlands to receive an award celebrating freedom of speech.

Travel bans have also extended to the director of the Egyptian Commission for Rights and Freedoms (ECRF) and activist Mohamed Lotfy in June 2015, as well as activist Esraa Abdel Fattah in January 2015.