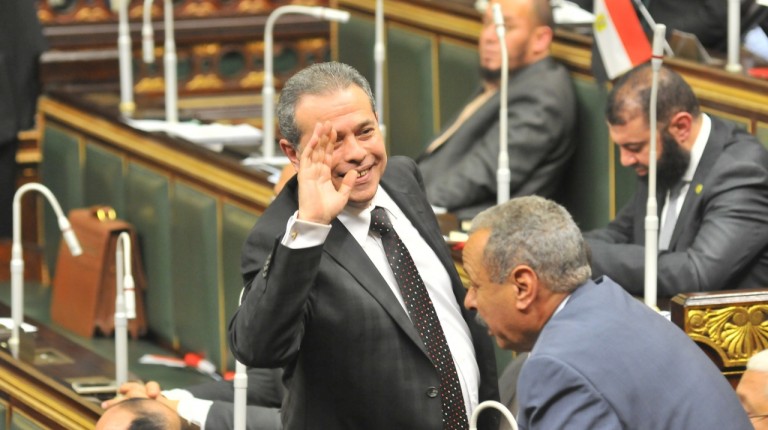 The parliament decided to refer a complaint filed by several parliamentarians against controversial TV host and MP Tawfik Okasha to a specialised committee for further review.

Security forces reportedly increased safety measures around the Egypt Media Production City (EMPC) Sunday after claims of intended riots. EMPC is a vital facility as it is home to all private TV channels.

Mostafa Bakry, also a TV host and MP, launched an anti-Okasha campaign through his daily TV show on the Sada Al-Balad channel after Okasha received Israeli Ambassador to Egypt Chaim Koren at his home last week. The meeting spurred widespread anger not only from parliamentary members but also from lawyers, activists, and former supporters of Okasha’s election campaign. In response to Bakry’s campaign, Okasha said Saturday he intends to assault the TV host.

Political expert on Israeli Affairs at Ahram Centre for Political and Strategic studies Abdelalim Mohamed told Daily News Egypt the meeting was bizarre and untimely as relations between Egypt and Israel have been already stable for many years. “I am personally against the normalisation of Egypt-Israeli relations on a local level. However holding talks on an official, diplomatic level is a different situation,” he said.

According to Mohamed, there are no legal boundaries for the personal communications of MPs and the state would rather leave Okasha for societal debate instead of interfering itself.

Despite the establishment of formal relations in the 1979 Camp David peace accord, Mohamed further stated that relations between both countries are conditioned since Israel is bound to keep peace with Palestinians, according to the accord.

Despite the backlash, Okasha did not take a step back and in fact further endorsed his supportive stance towards Israel on his programme Saturday. He also claimed he is ready to go to the Israeli Knesset.

Besides the complaint, MP Kamal Ahmed reportedly assaulted Okasha Sunday and hit him with his shoes. As a result both of them were kicked out of the parliamentary hall.

This was not the first time Okasha was ejected from a parliamentary session. He was expelled last week from a t session after a scuffle with Parliamentary Speaker Ali Abdel-Al and was later summoned for investigations by the parliament.

Ever since he started airing his show on Al-Faraeen Channel, Okasha has made several controversial statements against Hamas in favour of Israel. On his TV show in the summer of 2014, during which time a bloody conflict broke out between Israel and Palestine killing hundreds of Palestinians and destroyingseveral locations in Gaza including Al-Shuja’iyya, Okasha described Israelis as “real men” who sought vengeance from the “terrorist” Hamas troops.

Last week and also in a bid to normalise relations between Egypt and Israel on the local level, a delegation of Arab journalists including an Egyptian visited Tel Aviv in a media tour.