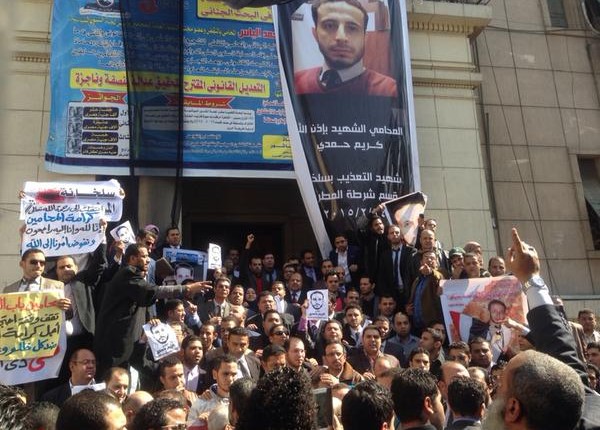 The Lawyers Syndicate has announced a series of tentative measures to guard against abuses of state power to which its members and the professional institution have been subject.

The syndicate’s allegations against the executive authority and the security forces range from arbitrary detentions and violence committed against lawyers to intimidation and surveillance. The syndicate alleges that these practices intentionally undermine the legitimacy of the judicial process.

In an attempt to guard against these practices, the syndicate issued a statement on Sunday, listing a series of preventative measures.

“The syndicate is currently seeking to document all cases of detained lawyers to reveal cases in which several security authorities have fabricated charges or are monitoring, watching, and intimidating lawyers,” the syndicate said in a Sunday statement.

Head of the syndicate Sameh Ashour called for an emergency meeting Sunday, following events that developed during the weekend regarding the detention and disappearance of lawyer Ibrahim Abdul Moneim Abo Gamos last Friday.

Following claims from colleagues of the detained lawyer in Sharqeya of “enforced disappearance” and pressure by the syndicate on officials from the Ministry of Interior, the ministry finally responded by stating Abo Gamos had been arrested on a warrant by the National Security Apparatus’ prosecution authorities. Abo Gamos was charged with belonging to the banned organisation of the Muslim Brotherhood.

“The lawyer was denied his rights as a suspect as per constitutional Article 54, which forbids interrogation of suspects in the absence of their defence lawyers,” the syndicate explained. It further stated it will form a team of lawyers to defend Abo Gamos.

The lawyers’ statement emphasised that it would be impossible for them to continue working under current oppressive circumstances. This comes amid an extended crisis between the Ministry of Interior and the Lawyers Syndicate and other professional syndicates in relation to the continued police brutality and other forms of security repression that lawyers, doctors, journalists, and others have suffered.

Both the press and doctors syndicates have instituted escalation measures against the Ministry of Interior, ranging from large press conferences, rallies, strikes, and the issuance of condemnatory statements that include demands for reform.

“State institutions must abide by the law and abstain from manipulating counter-terrorism efforts [to pursue further crackdown on citizens], including those at the top of such institutions: the president of the country, the Supreme Judicial Council, the parliament, and the government,” the syndicate said.

Torture in detention during second half of Al-Sisi’s year