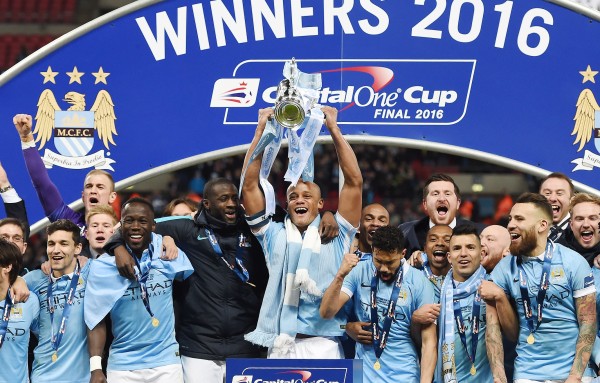 After dramatic match against Liverpool at Wembley Stadium, Manchester City took the Capital One Championship, winning 3-1. Tensions were high as the 90 minute playtime ended in a draw. The two teams continued playing into extra time but the score remained 1-1 until Manchester City scored two more goals in the penalty shootout.

Manchester City, also known as the Citizens, took home their fourth Capital One trophy (the League Cup) in no small part thanks to goalkeeper Willy Caballero who made three incredible saves during the nerve-wracking penalty shootout leading the team to victory.

Manchester City boss Manuel Pellegrini, who will leave City at the end of the season, didn’t select top  goalkeeper Joe Hart instead keeping his  promise to Caballero by allowing him to play in all Capital One Cup games. The Chilean manager insisted that he would rather lose to Liverpool than lose his principles.

“I’m very happy, not because it’s my final season but for many other reasons,” Pellegrini said, following the match. “I’m pleased with my team’s performance against a very strong team like Liverpool. I’m happy for Caballero as I think he deserved his moment in the spotlight and I’m happy to win a title in February.”

“The trust of the team is very important to me. I’m happy for Joe Hart who has proved to be good person as well as goalkeeper; he always supported Caballero and helped him in the dressing room. Personally, I am happy because I did not go back on my word,” Pellegrini continued.

Manchester City began in the third round, in which they were drawn against Sunderland at the Stadium of Light. Man City won 4–1.

In the next round, they were drawn against Crystal Palace for a home game at Etihad Stadium. Manchester City won 5–1.

In the quarter finals they were drawn against Hull City also for home game, winning 4–1.

In the semi-finals, they were drawn against Everton and despite losing 2–1 at Goodison Park, Manchester City won 3–1 at their home stadium thus reaching the final 4–3 on aggregate.