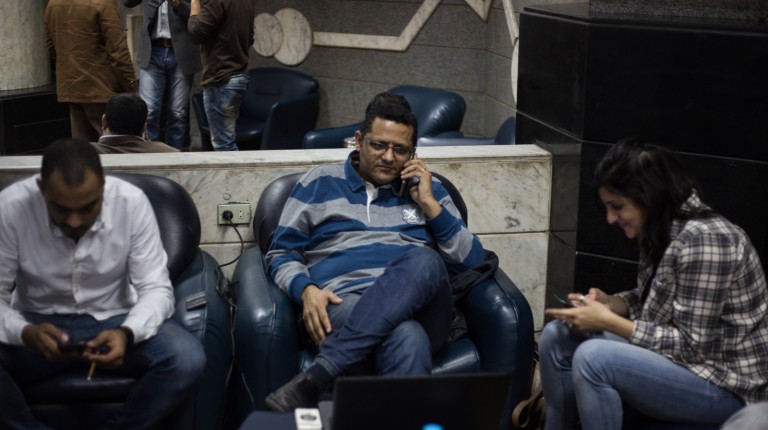 Prominent journalist and head of the Freedoms Committee at the Press Syndicate Khaled El-Balshy and committee member Mahmoud Kamel announced Sunday they will hold an open strike at the syndicate to protest the poor conditions in prisons for detained journalists.

“All of our best attempts to communicate with authorities have gone down the drain,” El-Balshy told Daily News Egypt Monday, to which Kamel said: “Here we are, sitting on the syndicate’s floor, until journalists obtain their rights.”

Both El-Balshy and Kamel have actively sought to improve the conditions of journalists in the practice of their professions. Through many statements, reports, conferences, and rallies, the leaders of the syndicate’s Freedoms Committee have advocated against the arrest, detention, and security intimidation of journalists and decried the “inhumane” prison conditions their colleagues face.

The journalists said they have used all possible means of communication to shed light on the worsening health conditions of detained journalists, especially those held at Al-Aqrab prison. “Their families are asking us to save them from a ‘slow death’,” El-Balshy said.

He said journalists Hisham Gaafar and Hossam El-Sayed were transferred to prison hospitals, while Youssef Shaaban, detained in Borg El-Arab prison, has been denied medication for over 10 months. The prison doctors said Shaaban needed a check-up on his liver, which is currently failing. Moreover Hany Salah, manager of the pro-Muslim Brotherhood TV channel Misr 25, needs to undergo an urgent eye surgery.

On Friday, the Press Syndicate submitted official complaints to the prosecutor-general. The wives of journalists detained in Al-Aqrab prison gave details of the violations and tough conditions in prison. This includes lack of ventilation inside prison cells that results in the spread of mould, fungus and skin diseases, solitary confinement, lack of food and medicines, increased prices in canteens despite it being the only place where prisoners can get food since the administration does not allow visitors to bring in food.

The wives said visiting hours are often closed for months at a time and when it does open, only about 30 to 40 people are allowed to enter, which is a very small percentage. This led to the families, including senior people and children, to sleep in front of the prison so they can enter in the early morning. However the majority are rarely able to secure a visit.

“We have presented complaints and requests to the National Council for Human Rights (NCHR) to assist us to visit the journalists in prison and follow up on their situation, but it was all in vain,” Kamel said.

El-Balshy and Kamel also submitted demands to the Ministry of Interior, the prosecutor-general, and to President Abdel Fattah Al-Sisi, pledging pardons for some of the journalists under pre-trial detention or in poor health.

The state security apparatus, represented in the Ministry of Interior including National Security authorities, has conducted several raids on homes of journalists, often detaining them unlawfully, delaying the announcement of their location to their families, and fabricating charges against them, El-Balshy said.

According to the Freedoms Committee’s report issued mid-February, the issue does not only concern journalists currently in detention, since others face this risk through court sentences issued in absentia.

An estimated 42 journalists are either in detention or at risk of being detained. They include 20 cases related to the practice of the journalism profession, for seven of which prison sentences were issued in absentia, and eight journalists are under investigation following reports filed by Minister of Justice Ahmed El-Zind, according to the report.

Photojournalist Mahmoud Abou Zeid ‘Shawkan’ has been behind bars since his arrest during the security dispersal of Rabaa Al-Adaweya on 14 August 2013. Despite Shawkan completing the maximum legal detention period of two years without trial, the court has not yet held a single session to address charges presented to the photojournalist.

Co-defending over 700 suspects in this case, Shawkan is facing accusations that include over 10 charges related to national security, violence, murder, attacking security forces and civilians, engaging in armed conflicts, and destroying public facilities.