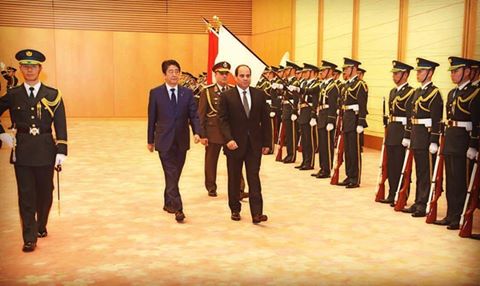 Al-Sisi praised Japanese culture and society and saidEgypt is keen to benefit from the Japan’s experience in several fields including education. He also confirmed Egypt’s eagerness to receive Japanese tourists.

Japan is willing to enforce economic ties with Egypt through development aid and the contribution of Export-Import Bank of Japan, and will sign agreements worth $110bn with Egypt, Abe said.

Japan will also loan Egypt $362m to improve its electricity system. An initiative will be launched for future cooperation in the education system in order to train 2,500 Egyptian students. Al-Sisi and Abe discussed current affairs in the Middle East especially the Syrian case and fighting terrorism.

Al-Sisi said Egypt is looking forward to boosting relations with Japan. In his speech to the Japanese Parliament, he said economic cooperation with Japan is ongoing since it is executing several projects in the Suez Canal area and the reclamation project of 1.5m acres.

The loans will provide a total of $500m, according to an official statement issued by the Ministry of International Cooperation. Al-Sisi and Abe witnessed the signing of the agreements.

AL-Sisi’s visit to Japan comes as part of his Asian tour which included Kazakhstan and will end by visiting South Korea.

An expert in Asian issues, Mohammed Salah Eldin, told Daily News Egypt Al-Sisi’s visit to Japan is significant owing to its the focus on the education sector. “The 2,500 students, to be sent to Japan to study, will participate in developing education in Egypt,” Salah Eldin said.

Regarding the visit to Kazakhstan, Salah Eldin said it is the largest country in Middle Asia and developing good relations with the Kazakhstanis is crucial.

“In addition to the economic agreements signed with Kazakhstan, they have valuable experience in fighting terrorism as the “Islamic State” (IS) is comprised of  many Kazakhstani militants … Fighting terrorism is one of the most pressing issues for Egypt right now,” he said.

In Pictures: Al-Sisi visited a Japanese primary school to know more about the Japanese educational system