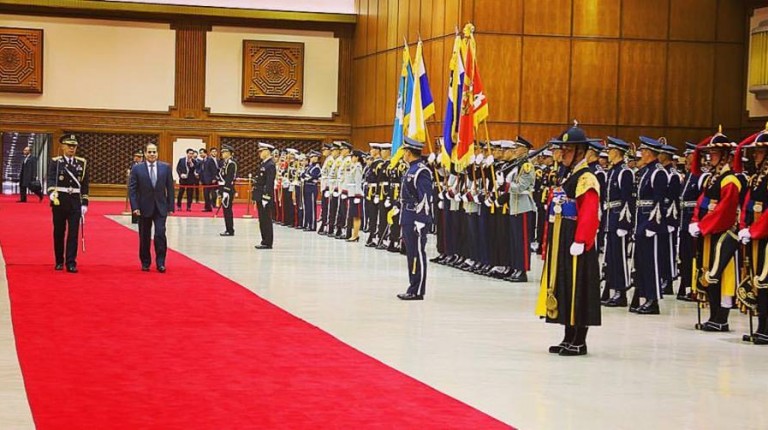 Egyptian president Abdel Fattah Al-Sisi arrived in South Korea in the last stop of his Asia tour that included Kazakhstan and Japan.

The visit will generate great momentum to augment ties of friendship and cooperation to a new level, according to the South Korean embassy in Egypt. Al-Sisi’s Asia tour focused on boosting the economic ties and improving the Egyptian education sector.

Japan confirmed its willingness to cooperate with Egypt in several fields including economics, health, and education. Tokyo praised Egypt’s efforts to boost its economy by taking several constructive steps, according to a joint statement released by both countries at the end of Al-Sisi’s time in Japan.

Japan will boost its collaboration with Egypt, especially in energy projects and the new developments in Suez Canal’s area. Both sides agreed on security and political cooperation to achieve peace and stability in the region, according to the joint statement.

Several valuable agreements came out of the visit, such as an education initiative, in which Japan will train 2,500 Egyptian students over the next five years. Japan also will cooperate with Egypt in developing the health sector in addition to loan Egypt $362m to improve its electricity system.

Al-Sisi visited a Japanese primary school Wednesday near the end of his visit to Japan. According to a statement released by the presidency, Al-Sisi gained knowledge of the Japanese education system and its extracurricular activities.

Japan is willing to enforce economic ties with Egypt through development aid and the contribution of Export-Import Bank of Japan; it will sign agreements worth $110bn with Egypt, Japanese Prime Minister Shinzō Abe said.

Al-Sisi and Abe discussed current affairs in the Middle East especially the Syrian case and fighting terrorism. Al-Sisi said Egypt looks forward to boosting relations with Japan. In his speech to the Japanese Parliament, he said economic cooperation with Japan is ongoing since it is executing several projects in the Suez Canal area and a reclamation project of 1.5m acres.

The agreements will provide a total of $500m in loans, according to an official statement issued by the Ministry of International Cooperation. Al-Sisi and Abe witnessed the signing of the agreements.

AL-Sisi’s visit to Japan comes as part of an Asia tour which included Kazakhstan and will conclude following his visit to South Korea.