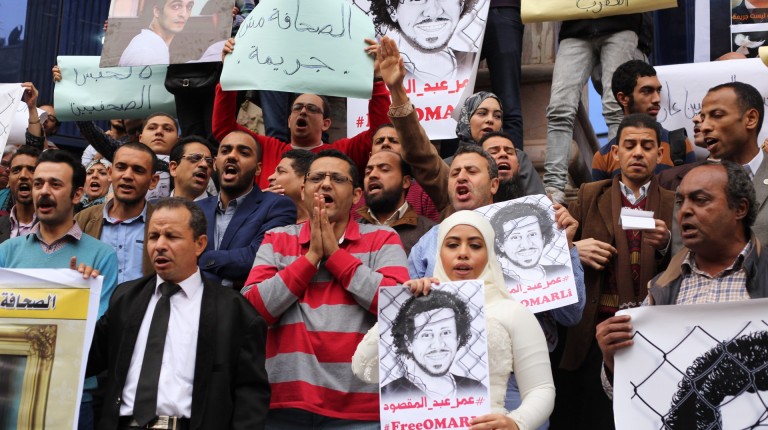 Hundreds of Egyptian journalists organised a protest on Wednesday in front of the Press Syndicate to demand the release of fellow journalists detained in Al-Aqrab and other prisons, amid the state’s tacit acceptance of their deteriorating health.

Protesters shouted slogans that condemn the state’s practice of imprisoning journalists and the deleterious conditions that prisoners are subject to inside Al-Aqrab prison. The expressed solidarity with the prisoner’s who have begun a hunger strike to demand an improvement to their conditions.

Head of the syndicate’s Freedoms Committee and member of the syndicate’s council Khaled El-Balshy had organised a sit-in at the syndicate, along with colleague Mahmoud Kamel, to demand that journalists in deteriorated health conditions in prisons be transferred to hospitals and receive medical treatment.

“Our fellow journalists are suffering inside prisons. Violations must be stopped,” El-Balshy said during the protest.

A statement released by the Freedoms’ Committee Wednesday said it was informed through the wives of the detained journalists that the Ministry of Interior instructed prison authorities to respond to their demands regarding medical treatment.

El-Balshy, announced the suspension of the sit-in following Wednesday’s protest, to plan for a Press Syndicate general assembly on Friday, calling on journalists’ wide presence and participation.

A number of human rights activists, and the families of the detainees visited the sit-in, including members of the state-affiliated National Council of Human Rights (NCHR) Ragia Omran, George Ishaak and Kamal Abbas.

According to Wednesday’s statement, current Head of the Press Syndicate Yehia Qalash assured protesters that he supports their demands and will personally follow up on their requests and demands of releasing the detained.

Moreover, former syndicate leader Diaa Rashwan actively engaged with journalists since the first day of El-Balshy’s sit-in, which started last Monday. Rashwan confirmed to the Freedoms’ Committee that Hisham Gaafar and Hossam El-Sayed were transferred to Al-Manial teaching hospital and the syndicate has requested Mona Mina, Secretary-General of the Doctors’ Syndicate, to be involved as a third party to follow up on the medical conditions of the journalists.

There were also official promises of transferring Hany Salah El-Din and Youssef Shaaban to continue their medical treatment, according to Rashwan.

Since the ouster of former president Mohamed Morsi in mid-2013, journalists have struggled to do their jobs as they have faced threats while reporting in the field, particularly while covering protests. The most violent incident was the shooting of young journalist Mayada Ashraf on 28 March 2014.

Journalists faced a myriad of risks: arrest, detention, intimidation by security forces and physical assault from both the police and civilian population.  After the election of President Abdel Fattah Al-Sisi, press freedom was jeopardised by further violations, committed mostly by the executive authority and state security institutions. The current regime has deployed a multifaceted and broad policy of oppression on the press and the media to ensure that dissident voices are made silent.