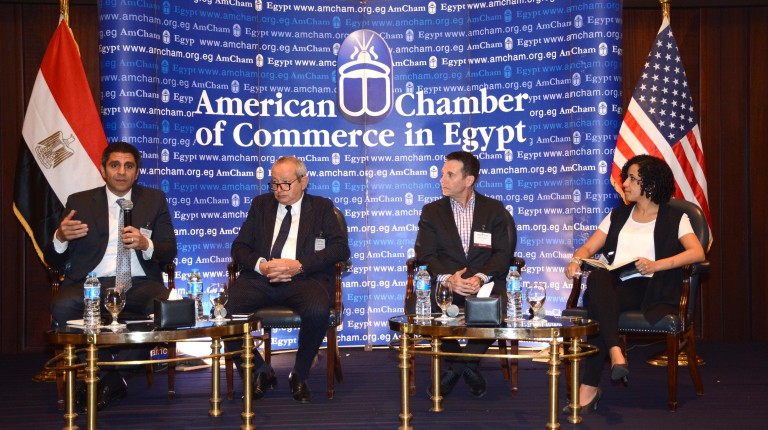 Businessman Naguib Sawiris stated Sunday that the Egyptian government must embrace new technology, lauding technology’s democratising force in a country he claimed relies on bureaucracy and its attendant corruption risks. Sawiris statements came during a press conference held by the American Chamber of Commerce on how technology is changing the business model. No stranger to controversy, Sawiris said that in Egypt “we tend to do everything under the hand of bureaucrats and open more doors for corruption”.

“Egypt is the only country that infringes on human rights,” Sawiris said, referring to the government regulations imposed on the transportation sector. “One cannot drive commercially unless he is a member of the Drivers Syndicate.”

White taxi drivers have protested the emergence of Uber and Careem in the Egyptian market, after the private transportation service companies gained a significant client base in Egypt.

“You cannot stand against innovation. You can only join and see how you [the government] can help,” Sawiris said.

Chief advisor and member of the board of directors at Uber David Plouffe said that governments should not think that business operation has to be according to  “either the only way or the new way”. Rather, government should focus on upgrading their technology.

“Governments should focus on how they can innovate and elevate themselves,” Plouffe added. “We went to some countries and found that the transportation regulations have been operating for 40 or 50 years and have not been looked at [since then].”

Uber has also faced demonstrations from taxi drivers in New York and Paris, similar to the ones that erupted in Cairo. The company has been widely accused of circumventing local laws in the cities in which it operates, and harming the livelihoods of the local taxi drivers.

Sawiris stated that companies should do “their homework” and explain to governments that they are not “the bad guys” that are coming to Egypt to deprive the white taxi drivers of their jobs.

“They are targeting a different segment and they are more expensive,” the business tycoon said.

Plouffe contended that Uber focuses on the personal car market but is not interested in expanding into the taxi market – drawing a distinction that has been challenged by taxi drivers and economic analysts alike.

Sawiris advised entrepreneurs to be defiant in the face of the government’s barriers.  “You cannot be entrepreneurs and not have muscles when the goal of every bureaucrat is to stop you from achieving your goals,” the businessman said.