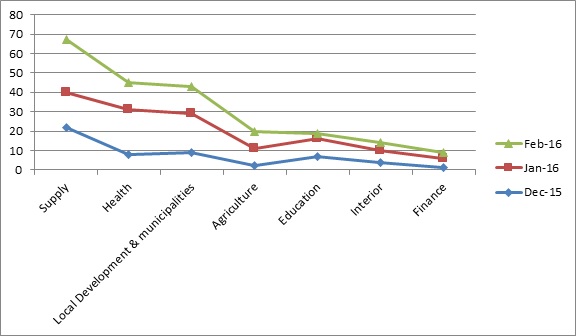 Partners for Transparency (PFORT), an NGO focusing on counter-corruption measures, issued its monthly report stating that there were at least 122 cases of corruption committed within Egyptian ministries during February 2016.

PFORT reported the highest number of cases of corruption occurred within the Supply Ministry where there were 27 documented incidents.

Most documented cases were related to raids conducted on markets and distribution outlets by regulators at the Supply Investigation Authority that discovered the sale of expired food or donkey meat advertised as beef at government-affiliated vendors. The Supply Investigation Authority also discovered  the sale of smuggled wheat products sold in informal markets.

The PFORT attributed one to four cases of corruption to 15 ministries in addition to the ministerial cabinet, the House of Representatives, and other governmental economic institutions.

Since the NGO began issuing reports in January 2014, PFORT has collected data from local media sources and other monitoring bodies, such as the Administrative Prosecution or the Central Auditing Organisation (CAO).

Notably, PFORT has emphasised various incidents of wasting public funds. After their support of CAO findings, the governor of Menoufeya referred the directors of an association concerned with school students’ affairs to prosecution authorities.

According to the initial CAO report, the directors had embezzled EGP 7m in public funds in addition to other financial violations.

Corruption is also widespread at local levels where there is less centralised oversight, especially as it pertains to the purchase and leasing of land.  In each of these two spheres, there have been several documented cases of corruption committed by the Agriculture Ministry and Local Development Ministry.

In a notable case, six government engineers operating within the Agricultural Industry were accused of seizing lands worth EGP 2bn. On 4 February, the North Giza Court renewed the detention of the six public employees, according to state-run newspaper Al-Ahram.

PFORT also stated that among the 122 cases reported in February 2016, 76% are under investigation by the prosecution, while 12% of the cases are being examined by courts. A total of 8% of the cases have been closed, while 4% have not been investigated.

The majority of the corruption cases occurred in Cairo.

The PFORT report praised the legislative decision to establish anti-corruption units within certain ministries, notably the Education Ministry, the Agriculture Ministry, and the Finance Ministry.

How bad is corruption in Africa?