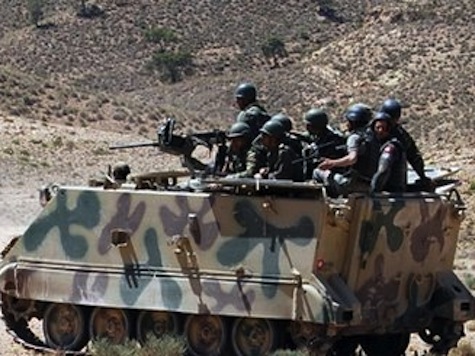 The Tunisian army killed six “terrorists” late Tuesday in the city of Ben Guerdane on the Libyan border, an army spokesman said.

Forty-two extremists were killed in clashes between the army and extremists’ militia.

Tunisian prime minister Habib Essid said Tuesday that 50 “Islamic State” (IS) militants attacked the city of Ben Guerdane on the Libyan border to establish it as an IS province.

He said 55 people were killed Monday, including 36 terrorists, 12 security personnel, and seven civilians. Dozens of militants attacked security buildings in Ben Guerdane Monday and clashed with Tunisian security, which then chased them in the streets.

The 50 people carried out the operation, using a mosque in the city as a starting point. Investigations revealed they were planning to seize security buildings in the city to declare it an IS province.

“They wanted to take over the barracks and police stations and gain territory but our forces were ready,” Essid told journalists. “They thought it was going to be easy and the people of Ben Guerdane would help them. But Tunisians would never accept them.”

It is still not clear if the militants crossed the border from Libya or not. Tunisia decided to close its borders with its neighbour Libya following clashes between the Tunisian army and militants in the city of Ben Guerdane.

The political party of the former Tunisian president Mocef Marzouqi urged Tunisians to support their government to confront terrorism.

The chaotic situation in Libya is casting its shadow over Tunisian security, as Islamist extremist groups trained in Libya carried out several terrorist operations in Tunisia in 2015, including attacks on Bardo museum in the capital and a resort in Souse.

50 militants attacked Ben Guerdan to declare it as IS province: Tunisian PM