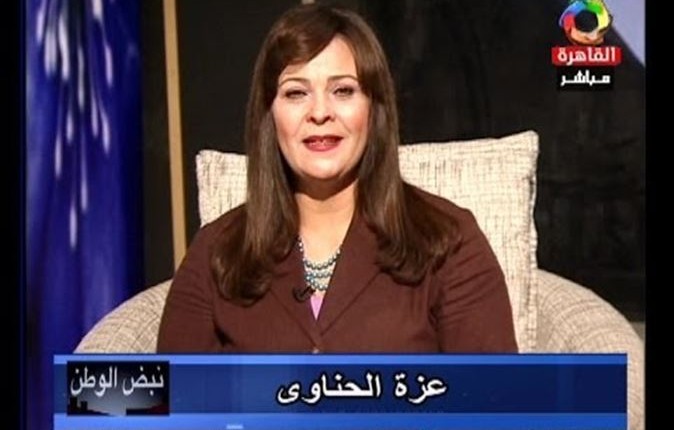 TV anchor Azza El-Hennawy stands to face a dismissal from her show on state television, based on the recommendations of an Egyptian Radio and Television Union (ERTU) committee set to look into her Sunday episode.

Chairman of the ERTU’s Board of Trustees Essam Al-Amir decided to form a committee to investigate TV anchor Azza El-Hennawy’s episode on her weekly Sunday programme on state television, in which she criticised President Abdel Fattah Al-Sisi and broadcast critical responses from social media users and public media personnel.

During an episode with journalist Osama Shehata to discuss Sunday’s news, El-Hennawy dedicated the last two minutes to direct a message to Al-Sisi, in which she criticised his overall performance in regards to improving and developing the country since he took the presidency.

Al-Henawy said: “You didn’t solve anything since you began ruling Egypt; you promised that within two years we will see a new Egypt, and one year and eight months have passed without any improvements. Only a few months are left and we are waiting.”

She continued her criticism, saying the president calls on people to work to help him, while he is not working towards any changes, claiming that he is ”all talk and no action”.

The committee, comprised of media personalities from the state media sector and media professors from Cairo University, will assess the episode in accordance with show regulations and media ethics. The committee report must be submitted to Al-Amir within two days.

In its report, the committee will determine whether El-Hennawy crossed any boundaries concerning Egyptian TV regulations and media professionalism, and will give their recommendations regarding how to respond to the case.

Following the airing of the episode, other TV anchors  condemned El-Hennawy, and defended the president from her disparaging remarks, accusing her disregarding industry standards. Many actors and TV personalities criticised her on their social media pages.

On the fifth anniversary of the 25 January Revolution, El-Hennawy found herself barred from presenting her weekly Sunday episode as, according to her, Egyptian heads of state-TV decided to broadcast special coverage of National Police Day rather than the revolution.  El-Hennawy said she had originally planned to address several topics in relation to the revolution’s anniversary, including the notorious trials of former president Hosni Mubarak.

In November 2015, El-Hennawy was suspended from Al-Qahera Channel, due to her criticism of the official response to the flooding in Alexandria. The anchor was also suspended during the rule of ousted Islamist president Mohamed Morsi, and faced continuous backlash due to her statements at that time.