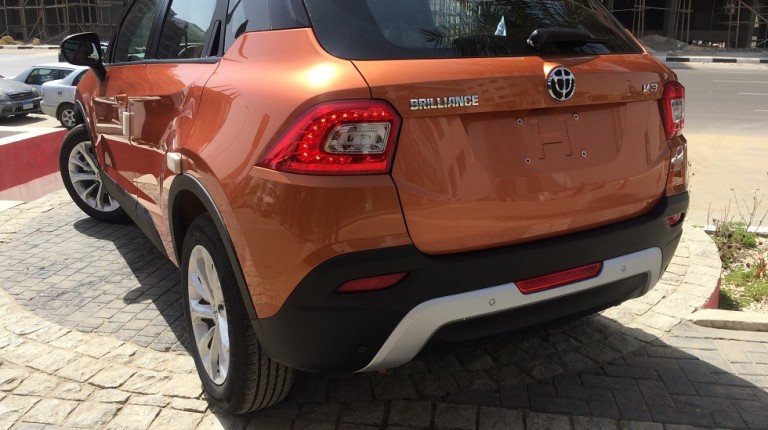 Daily News Egypt test-drove the new V3 SUV, presented by the Chinese brand Brilliance Bavarian Auto to the Egyptian market during the events of the international automotive show Automech Formula in its 23rd session.

V3 is the first SUV launched by Brilliance in the past three years after the company stopped launching its cars soon after FRV and V5 SUVs achieved great sales in the Egyptian market. The company addressed the youth demographic through the FRV, whereas V5 fell under the category of family cars.

The launch of new V3 for the first time in Egypt will be a surprise to all of Brilliance’s customers, Saad said. Moreover, the company aims to attract new customers in order to increase its sales in 2016.

The test-drive took place in the headquarters of Brilliance Bavarian Group in Katameya where marketing manager Magdy Adel, alongside the marketing and sales team, received Daily News Egypt in order to give a clearer picture of the new car before the drive.

Adel said the car belongs to the medium-sized SUV class. He said that its outer design is considered a shift for the company, with its fierce front and the prevalence of sport lines, something that distinguishes the car’s design if compared to previous designs. He added that the car is equipped with a 1500cc engine, and 112 horsepower at 6000 torques per minute.

The engine now complies with European emission standards which lessens the amount of harmful emissions released into the environment whilst maintaining the same level of optimal engine performance, according to Saad.

Adel predicts that the car will be admired by Egyptian customers, especially the demographics of families and young people. He said the reasons include the car’s convenient height from the ground, and its spacious inner design that makes both the driver and the passenger comfortable, in addition to the large storage space in the trunk and inside the car itself.

The SUV will be officially presented in Automech Formula, and bookings will begin to open in three different categories, so customers can choose what is most convenient for them, Adel revealed.

The price has not yet been decided, said Adel, it will be announced during Brilliance’s participation in the show.

The general features of the car, as seen by Daily News Egypt, include the front, which has a fierce look with large LED headlamps on the sides, and a circular lens for regular light in the middle in order to reinforce its sporty form. In the centre of the front, there is the Brilliance brand sign, made from nickel chrome.

The bumper in the front is relatively large compared to other SUVs, with a U-shaped nickel ornament in the middle, which is very suitable for the front shape. On the bumper’s sides there are sporty-looking grilles. On the far sides of the bumper, there are circular fog lights.

Both sides of the car are characterised by simple lines, taking into account reinforced plastic ornaments in order to give an aesthetic look to the parts topping the front and rear wheels.

The door handles were introduced in a new shape to show the new spirit in the design of Brilliance SUVs.

The car uses 17-inch tyres with sporty wheel rims that suit the general look of the SUV.

The rear is characterised by medium-sized LED lamps with a circular shape.

The rear of the car has a large-sized rear bumper, to give it a sporty touch, especially with the presence of matt nickel inside the bumper, which depends on the black colour, in the middle of which is a rear fog lamp.

The company provided the car with an alarm system when moving in reverse direction, especially as the front of the car is relatively high above the ground.

V3 depends on a totally new engine, a first for the company. It provides a horsepower of 1500cc Dohc. This is a very convenient engine for the nature of the Egyptian market, which generates a horsepower of 112hp at 6,000rpm. The engine depends on a sophisticated technology and European emission standards. The car is also provided with a 5-speed automatic transmission for front-wheel drive.

The weight of the car is about 1,350kg, with a maximum boot load of approximately 455 litres which is a suitable space for this type of car.

The car has brakes that function with the ‘ABS’ system to prevent sliding and the ‘ESB’ system to distribute braking force on all four wheels. This is in addition to anti-theft system ‘engine lock system’, and the balance control ‘ESC’.

The cabin is characterised by a smooth interior appearance, represented in the ease of access to all needs within the car, such as the air conditioner and music player.

The car features a 7-inch display screen for the music player that functions via USB, CD, and ‘U Max’ inputs.

The company also took into account designing the dashboard with sport stripes with a hand-stitched finish. The steering wheel was designed in a different colour and with a sporty, elegant touch.

The cabin is available in two categories; the first one is somewhat usual with nickel chrome and sporty lines, whereas the second has an interior cabin designed with three colours to highlight the sporty look of the vehicle.