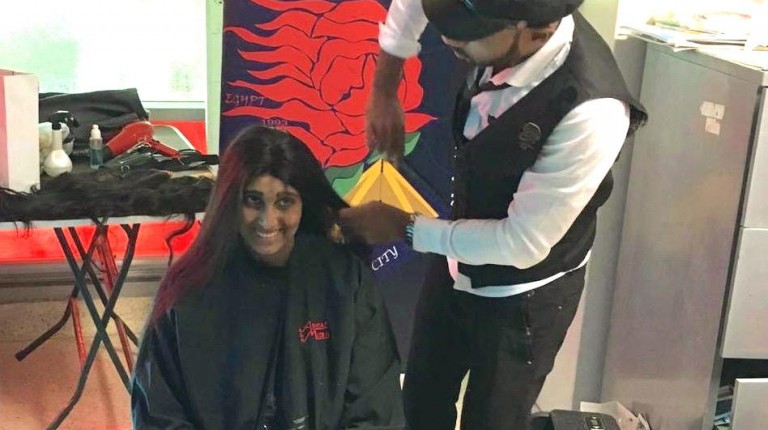 It was an ordinary day at the 57357 Children’s Cancer Hospital. Children enduring the physical and emotional turmoil of cancer and its treatment were arriving for appointments, undergoing chemotherapy, or lying in bed. But in one calm corner of the largest paediatric oncology hospital in the world, something unusual was happening. For two teenage girls, who had suffered the treatment’s normal effect of total hair loss, their usually grim day was being turned upside down.

Prominent hairdresser Ashraf Abo El Magd, of Salon Ashraf and Mazen in Heliopolis, had turned one of the hospital’s offices into a salon, shaping long wigs into the hairstyles the two cancer patients had always wanted.

“It felt like I was never sick,” said 14-year-old Etab Ali, who had been crying that morning. “My hair used to be the same length and colour.”

The project was made possible through the collaboration and generosity of the community, the hospital, and donations to bring the hairdresser’s idea to fruition. The idea to be a stylist to cancer patients had always been on Abo El Magd’s mind, but he hadn’t been able to reach the hospital or raise the necessary funds until community organisation Inner Wheel Club came onto the scene.

“Abo El Magd brought it up at another event the club was holding,” said Nihal El-Bakry, head of Inner Wheel Nasr City branch. The club immediately raised donations, and was able to collect enough money for five wigs, each costing EGP 2,000.

Joining the good cause, the retailer sold the wigs at the cost price. “The hairdresser refused to use plastic low-quality wigs, which wouldn’t allow him to freely style the hair as the girls imagine them to be,” said El Bakry.

Etab Ali’s smile after Abo El Magd was done was priceless, El Bakry said. “Her face lit up, like it was brought back to life,” she added. The hairdresser agreed, saying that he could feel the change in her psychological state.

“Effects like weight loss or hair loss can erode their confidence and change their experience of their surroundings. For children, it can be catastrophic. If they are in school, they can be bullied and their self-image can be injured,” said oncologist Yehia Abugabal, co-director of the International Cancer Research Centre (ICRC) about the role that positive self image can have in easing at least one of the numerous burdens for those living with cancer.

“This can reflect on the child’s attitude towards the treatment, because [to go through these treatments] you have to be psychologically positive. So the physical response can be negatively affected,” Abugabal said.

However, Abugabal argues that the emotional effect of hair loss goes much deeper than just changing the child’s outward appearance.

“A wig is a good way to cover the obvious signs of losing your hair, but it’s also important not to cover up what the child is going through on the inside. So, [you need to] maintain a dialogue about what they are feeling, and acknowledge and validate these experiences. This is about support from society, and not just maintaining the outer look,” he stated.

Until society is kinder to those who look different, the happiness the hairdresser sensed that day made him to decide he will come back as many times as needed to do it over again. “It was [the best] day of my life. I did not want to leave the hospital,” he says. “Any child has to be happy. It is our role to make them happy.”

Back in Ali’s room, her mother was beaming and her sister was already putting a hair band on the wig. “Do we get to keep it?” she asked. “I wanted to get Etab one before, but it was so expensive.” The teenager has barely taken it off since then.

A little girl passed by the room, with a look of longing to have the same experience. From this encounter alone, the hairdresser has decided to import smaller wigs for younger girls, currently unavailable in Egypt.

“Everybody gives me compliments now,” said Etab Ali, adding that cancer patients should be given an alternative to their hair. “It will make a difference in their treatment.”